It feels as if everyone lately has been wanting a shot at portraying a highly-skilled assassin, very possibly due to the great success of a certain Keanu-led franchise, but not all of them manage to do enough to stand out from what has fast become a very crowded field. Ava is a film that not only doesn't stand out, it becomes so well-camouflaged by the cliches and tired tropes it is wearing that it's pretty much the John Cena of the skilled assassin movie sub-genre.

Jessica Chastain is the titular Ava. She is very good at her job, killing people, but has started to wonder what people have done to prompt her being hired to put an end to them. This makes Ava a potential liability, despite the fact that she still (literally) executes her orders. Her "handler" (Duke, played by John Malkovich) still has faith in her though, but others want her retired. And retired means dead.

Writer Matthew Newton seems to think that anyone watching Ava will not have seen any other movie like this, which is the only explanation for a script that is so consistently lazy from start to finish. Ava is given three defining characteristics - her questioning nature, her history of addiction, and her deadly skillset - and some messy family tension (with a mother in hospital and a sister now dating her ex-boyfriend), but she never feels like a fully-realised lead character. It isn’t as if we cannot accept assassins who are defined just by how good they kill people, but there isn’t enough information given to us to explain why Ava has started to ask more questions, or why she has kept such strong connection to her family while still in a job that would seem to make that a very risky proposition.

Director Tate Taylor manages to get everything onscreen competently enough, helped by the fact that Chastain is as committed to the physicality of the role as you would expect, but he doesn’t ever do enough to elevate the script. Some fight scenes are decent, some have to be over-edited. Sadly, none of the moments of straightforward drama work, with characters chopping and changing their moods, depending on what exposition is required or how any scene is leading everyone towards the inevitable climax.

Chastain is good in the central role, even if she isn’t quite good enough to make the film worth watching, and Malkovich excels in a supporting cast that also includes Colin Farrell (good value), Geena Davis (always welcome in any movie), Jess Weixler, Common, Diana Silvers, and a badass Joan Chen. Nobody does a bad job. They’re just stuck dealing with that lame script that leaves them hung out to dry.

On the plus side, the pacing isn’t bad, the runtime clocks in at just over 90 minutes (from opening scene to the start of the closing credits), and you can, with some hard work blocking out the worst elements of the script, accept it as a mildly diverting action thriller. I would always be ready to recommend 100 other movies ahead of this though, easily. 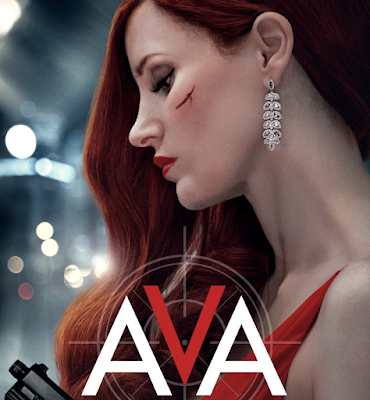