The easiest, and most flippant, way to summarize I Care A Lot is to make some joke about how I didn’t really care for it. I enjoyed it enough while it was on, and the central casting helps a lot, but the whole thing lacks any plausibility, which means it lacks any real bite it should have.

Rosamund Pike plays Marla Grayson, a woman who has built up a very successful business around becoming guardian to numerous elderly individuals. This allows her to drain their assets, bill them for hours spent dealing with their cases, and generally profit from the misery of someone spending the last of their days in a care home environment. Unfortunately, Marla targets Jennifer Peterson (Dianne Wiest), a woman who is connected to the very dangerous Roman Lunyov (Peter Dinklage). This puts Marla and her partner, Fran (Eiza González), in mortal danger.

Written and directed by J Blakeson, this is a film that feels like it wants to be a few different things. It could be a comment on how we treat the elderly. It could be a taut and entertaining thriller. It could be a damning indictment of a system that leaves people with nothing as they simply aim to remain healthy and alive in a society that has already deemed them as having no (or very little) value. The fact that it fails to fully commit to any of these aims means that it ends up an unsatisfying middle of them all, with no one aspect handled as well as it should be.

It all looks clean and cool throughout, although I wouldn’t even say there’s anything particularly standout about the visuals, and the score from Marc Canham is decent, but there’s a distinct air of everything being competent, as opposed to actually good.

The only area of excellence is the cast, and Blakeson really stops the film from being a complete disaster by having such a great selection of main cast members. Pike is superb in a role that feels very similar to one of her best cinematic performances (you will know what one I am on about), and Dinklage is an excellent menacing presence. Wiest is the most pleasant surprise though, making the most of her small amount of screentime to remind everyone that she still excels in any role she is given. To be clear, the surprise isn’t her level of talent, it is seeing her get a couple of real moments to shine in a role that could have easily been no more than a fleeting cameo. González is fine, although not given much to do, and there is some excellent scene-stealing by Chris Messina (playing a slick lawyer) and Macon Blair (playing the son of someone scammed by Pike’s character).

I Care A Lot? Nope. And I doubt others will. 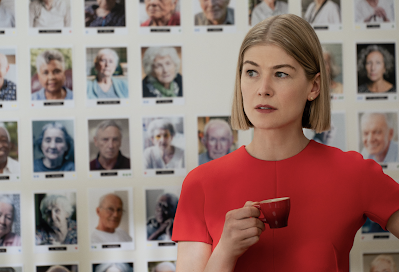