It’s not the worst thing to have a new version of A Christmas Carol made available to audiences every few years, even if no newer version can ever hope to do a better job than The Muppets. Spirited is a musical comedy that places Will Ferrell, Ryan Reynolds, and Octavia Spencer in the lead roles, playing characters very familiar to anyone with even a passing acquaintance of the classic Dickens Christmas tale. Which is pretty much everyone.

Reynolds is Clint Briggs, a man who has built a career on playing the public like a violin. He manufactures outrage, knows how to manipulate everyone around him, and doesn’t have time for anything in his life outwith his work and ego. Ferrell is the Ghost Of Christmas Present, tasked alongside the Ghost Of Christmas Past (Sunita Mani) and the Ghost Of Christmas Yet To Come (Tracy Morgan) to change the ways of Briggs. That could be tough though. He is labelled an “irredeemable”. But there was one other famous character transformed by ghosts who was once considered “irredeemable”, and he might be the person in the eBay position to help Briggs change his ways.

Directed by Sean Anders, who also co-wrote the film with frequent collaborator John Morris, Spirited is enjoyable enough for those who like the leads (including Octavia Spencer, playing Kimberly, the main assistant to Briggs, and currently having her own journey towards what she views as damnation or redemption). Sadly, there’s little else here to make it worth recommending.

What you get is a musical without decent musical numbers (with the exception of a fun number called “Good Afternoon”), a comedy without enough great laughs, and a riff on a classic tale that insists on breaking the fourth wall as characters remind you that they are all as aware of the plot and characters as viewers are. Give me a Deadpool riff on A Christmas Carol and I would be very happy, but this half-arsed attempt to be all things to everyone ends up just disappointing all but the most undemanding viewers. It’s a hard film to absolutely hate, but even those who enjoy it would probably admit that it could have been tweaked and improved in a number of different ways.

The cast are trying to do good work, and end up impressing most when they have moments they can play with what feels like genuine earnestness. Ferrell and Spencer have some lovely scenes together, and Reynolds almost gets a chance to show some of his actual acting chops during times when his character is being genuinely moved while revisiting the worst moment of his life. The laughs actually come more readily from the supporting cast, with both Mani and Morgan working well with what they’re given, and the likes of Patrick Page, Joe Tippett, Marlow Barkley, and Andrea Anders do decent work in the less comedic/super-serious roles.

I am not sure what would have helped make this a better film. A less smug script, I suppose. Pushing both Ferrell and Reynolds further out of their comfort zones. And better song and dance routines. Definitely better song and dance routines. Despite the budget and special effects, there’s also a constant feeling of this being staged very much like a theatre show. That is something I would enjoy, if I was watching it IN a theatre. Cinematically, it feels a lot less satisfying.

You cannot really go wrong with any version of A Christmas Carol. It’s a tale that ensures for good reason. It’s the main reason that Spirited works at all. It’s just a shame that so many other elements drag it down, like the heavy chains carried around in death by Jacob Marley. 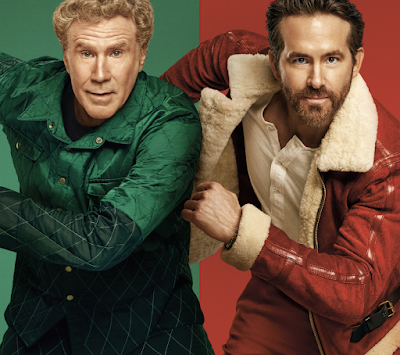