Netflix And Chill: Falling For Christmas (2022)

Written and directed by people who largely have a decent amount of experience in the Christmas movie sub-genre (with the exception of Jeff Bonnett, the relatively new writer who helped develop the story idea into the screenplay), Falling For Christmas is the film sold on the idea that we get Lindsay Lohan in a Christmas movie. That's all you need to know. It was certainly enough to motivate me into making this a priority in my viewing schedule.

Lohan plays the spoiled and selfish Sierra Belmont, a young woman who is due to receive a marriage proposal from her narcissistic "influencer" boyfriend, Tad Fairchild (George Young). It doesn't quite go to plan though, and both Sierra and Tad end up rolling down snowy slopes in different directions. Tad ends up in the company of Ralph (Sean Dillingham) at his isolated shack. Sierra ends up being found by Jake Russell (Chord Overstreet), a young man struggling to keep his hotel lodge business solvent. She's also lost her memory, which leads to her recuperating at the lodge, where it soon becomes apparent that she doesn't know much about housekeeping. But she and Jake get along very well, and his daughter, Avy (Olivia Perez), takes a liking to her.

Janeen Damian, making her directorial debut after years spend producing this kind of fare, knows what she's doing here (basically reworking Overboard in a snowy setting, with the more problematic elements removed), and she makes sure to stick close to a box-checking script, written by Bonnett and Ron Oliver (who actually started his writing AND directing career decades ago with the second and third movies in the enjoyable Prom Night series). Nobody watching this will discover anything to surprise them, but there are a few more proper chuckles than I expected, mainly involving Tad and Ralph.

Lohan is suited to this kind of entertainment. She's still very easy to enjoy onscreen, and it's nice to see her in something that isn't trying to sell itself on the notion of showing her in a very different light (as happened with The Canyons, for example). She also convincingly portrays a good connection with Overstreet, who has apparently studied every Christmas movie ever made to refine his portrayal of the safest and blandest male romantic interest ever. Young and Dillingham are fun together, and Young is especially good value for every minute he's onscreen, wearing a selection of ridiculous wardrobe choices and always ready to stage a photo for his legion of online followers. Perez is . . . there. She does what is asked of her, but I'd have to single out her performance as particularly irritating, even when compared to other typical performances of this type (overly earnest and ready to put on the big eyes at the drop of a bauble). Alejandra Flores is the kindly gran, and I guess does okay, and Jack Wagner is the rich and powerful Beauregard Belmont, Sierra's father, and the safety net that viewers see Sierra has had all her life.

This is exactly what it sets out to be, perfectly pleasant seasonal entertainment. It just happens to have one of the unintentionally creepy Santa figures I have seen in some time. Creepy Santa aside, this is a nice springboard for Lohan to use as a more focused return to some proper movies. And if you don't think this counts as a proper movie, I urge you to try getting all the way through the dire Among The Shadows. Lohan shouldn't have had to feature in that dross, and I'll be happy if she does even just one film like this every year that saves her from ever having to be put back in that position. 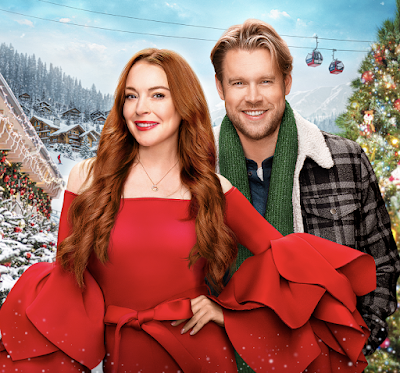