Hayley (Cora Kirk) and James (Asa Butterfield) are a young couple in love. They have been dating for a couple of months, but have to separate for the Christmas holidays. Hayley is heading to see her family (including her grandparents, some young, lively, brothers, an aunt embracing the her potential cougar status, and her mum and dad, played by Angela Griffin and Daniel Mays). James will be reuniting with his father (Alex Jennings). Except he won’t, because he decides to leave his train and join Hayley . . . who had decided to leave her train and join James. The two end up with very different experiences, and also learn about the secrets they have been withholding from their families, as well as one another, while lessons are learned and the weather keeps disrupting plans for them to get to their respective homes.

Your Christmas Or Mine? is a lot of fun, benefiting from a better budget and cast than most, but still resolutely selling itself as a typical Christmas film in many ways. There’s a lot of snow, you have at least one fun montage, different people share their different holiday traditions, and, most importantly, some people end the film in a radically different place from where they started. There’s at least one grumpy “Scrooge” who doesn’t embrace the spirit of the season, and one dead parent who plays a defining role in the lives of some of the main characters.

There are also some big chuckles here. Nothing that will necessarily top any “greatest comedy of all time” lists, but writer Tom Parry allows a number of abrupt and cheeky moments that may occasionally make you choke slightly on your mince pie and cocoa as you enjoy a well-placed insult, surprise, or implied naughtiness. Everything stays fairly family-friendly, but Parry knows exactly how far he can go with the warm banter and rude words.

Director Jim O’Hanlon is equally assured, and it shows how well both writer and director have honed their craft over the years spent working on a wide variety of TV projects. O’Hanlon paces everything perfectly, using the obvious transitions and manipulative shot choices to play viewers like a fiddle, and the effective score by Paul Saunderson only assists with the emotional manipulation. Did I know how everything would play out? Yes. Were one or two small surprises enough to keep me even more engaged during the 95-minute runtime? Yes. Did I still get a lump in my throat at various times during the third act, despite knowing where this was all going? I couldn’t possibly confirm or deny that.

Butterfield and Kirk are a winning combination in the lead roles, even if the former still needs to somehow stop his big eyes seeming to take up half the screen. Although I am not familiar with Kirk, I hope to see her in more movie roles soon. She has an easygoing likability and works best when her character is allowed to remain cheery and optimistic. Griffin and Mays also work very well together, having a lovely chemistry onscreen that makes them feel like a genuine married couple, warts and all. Jennings has to be the stiff-lipped and grim character, certainly for most of his screentime, and he does very well in that role. In fact, his delivery of lines that show him teetering on the edge of being more emotional ended up moving me more because of his refusal to ever fully show any “weakness”. There are also enjoyable performances from Harriet Walter, Natalie Gumede, June Watson, Ram John Holder, Lucien Laviscount, David Bradley, and Mark Heap, as well as Aston Wray and Harris Kiiza, playing those aforementioned young brothers.

Probably due to be viewed as just as disposable, ultimately, as many other films made for the Christmas TV schedules, Your Christmas Or Mine? deserves a bit more attention and appreciation. It may work with a familiar template, but it’s certainly miles away from, and much better than, the kind of thing we see rolling off the Christmas movie production line at this time of year. If my final rating doesn’t seem to reflect that, it’s worth noting that I am actually rating it AS a movie, and not just as a Christmas movie. 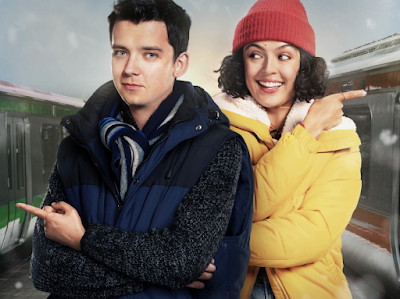