It can be tricky when you decide to rave about a new horror movie, because there are times when it seems that a rave-worthy entry in the genre seems to come along every few weeks. We horror fans are often spoiled, despite how people may view different years and decades as particularly fertile or fallow ground, and there's often the danger of hyperbole to navigate around.

Having said that, A Wounded Fawn is absolutely superb. I would easily rank it as one of my favourite films from this year, and that means that director Travis Stevens is now three for three with the feature films he has directed (before this one we had the enjoyable Jakob's Wife and, his feature debut, Girl On The Third Floor).

Sarah Lind plays Meredith, a young woman who has decided to go away for a weekend with Bruce (played by Josh Ruben). The two will be staying in a cabin in the woods, standard middle of nowhere kinda location, and a nice time will hopefully be had by the both of them. But things start feeling off from the start, and it isn't long until Meredith suspects that she may be in mortal danger. In a strange twist, however, it isn't long until Bruce also feels the same way.

Co-written by Stevens and Nathan Faudree, this is a film that delivers some weird and wild imagery within a template that could have easily just been a dark and entertaining serial killer movie. I'm still undecided about what everything means, particularly in the very last scenes, but I know that I loved every moment, whether it was a burst of surprising bloody violence or a languid "waking dream" showing us the mythical figures who were encouraging or castigating a confused killer.

It helps that both Lind and Ruben are genuinely excellent in their roles. The former is the kind of lead who emanates so much screen presence that she can play natural without ever seeming dull, the latter is great at being just a little bit "off" until the real danger of the movie is revealed. Although mostly just a two-hander, there's also a supporting role for Malin Barr that allows her to have a bit more screentime than you might expect, and allows her to portray a character who is more than just a potential random victim.

Dialogue may be minimal for a good 2/3 of the runtime, but Faudree and Stevens do a great job of filling the film with enough to observe and dissect throughout. There are many small details that end up becoming more important as they start to recur, and viewers start to realise the value that certain characters have placed upon them, and the whole thing is an obtuse puzzle that never becomes too frustrating while we all wait to be shown the ultimate reveal/solution.

From the audio work to the practical FX moments that will make you wince, A Wounded Fawn very rarely puts a foot wrong. It's held back from being perfect by the smallest of margins, and I couldn't even put my finger on anything I viewed as a proper negative aspect. I may even adjust my rating upwards whenever I make time to rewatch it. 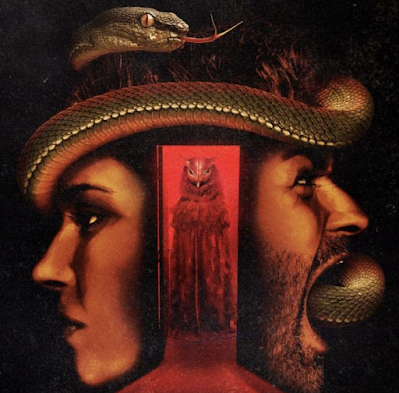