Jaws is returning to cinema screens for a limited run this year and I implore you to do what you can to see it on the big screen. It is, and always will be, the best blockbuster ever made and a masterpiece in modern cinema. Says me, anyway. When the spruced up Bluray is released later in the year I will buy it ASAP and enjoy rewatching it all over again (apparently the upgrade is absolutely superb).

But once again I come to hit a brick wall, how to review my all-time favourite movies while not covering all the old ground that has already been covered so many times. Released in the year that I was born, I feel like Jaws has always been a part of my life. I remember how I laughed when I saw it shown on TV after a weather report from Michael Fish (Fish and then shark, hahaha, see?) and then how shaken up I was two hours later. It terrified me and I loved the thrill of the experience.

People have already praised the performances (Roy Scheider, Richard Dreyfuss and the mighty Robert Shaw - that U.S.S. Indianapolis speech is, for me, up there with the Top 10 cinematic monologues of all time). People have also already praised the direction, obviously, what with it being the movie that sent Spielberg's career stratospheric after he cut his teeth on some fine earlier outings, including the magnificent Duel. Is there anything that people haven't praised here? The brilliant John Williams score, the technical failings and problems that led to decisions being made that would inevitably improve the film, THAT opening sequence, the fact that it's one of the few films to actually improve upon the book it was based on.

Nope, I have nothing new to add. Oh, for anyone just coming out of a 200-year coma, the film is about a great white shark terrorising the island of Amity and doing it inconveniently close to a holiday weekend when beach-combing visitors usually bring the cash that the small community needs to survive and thrive. Did I say great white shark? I meant GREAT BIG great white shark. The local chief of police, a marine biologist and a local fisherman band together to try and catch the beast before more people die.

After first seeing Jaws I did not even want to dip a toe in the waters of Portobello and anyone who knows that area near Edinburgh will know that I was more likely to be terrorised by a dirty needle or a used prophylactic than a great white shark but that's how much the movie impacted on my psyche and, indeed, on the entire psyche of popular culture since it's release. To this day, you cannot hear that minimalistic cello piece without thinking that a fin will soon be chasing after you. And, rambling as I have, I think that last paragraph contains all the personal and wider view of the movie that I feel should always be taken into consideration by those who try to wave it aside as an unspectacular, shallow thrill-ride. 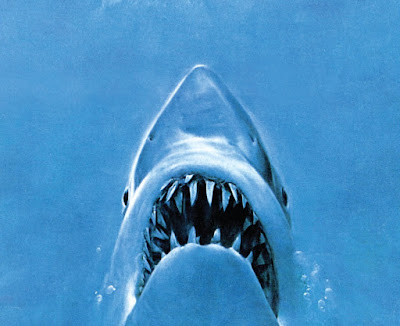