A standard haunted house tale with a good dose of blood and gore added, Girl On The Third Floor, the directorial feature debut from Travis Stevens, gets a lot right, not least of which is the casting of the main roles. It's a fun film that provides some solid scares, adding a new coat of paint to some very familiar fare.

C. M. Punk (AKA Phil Brooks) stars as Don Koch, an ex-lawyer who is now renovating a home that can be the location for the new life ahead with his pregnant wife (Liz, played by Trieste Kelly Dunn). The home has a history though, and that history seems to not want to lie dormant, especially when there's a chance to test anyone new coming into the house.

Starting off rather innocuously, you get fittings that are leaking dodgy fluids and the standard frustrations of things getting worse while someone tries to make improvements, Girl On The Third Floor follows a pretty standard haunted house movie structure. Things go bump, things get worse, a spirit appears to create even more trouble, and the central character finds themselves being prodded and pulled apart like so many fresh bread rolls accompanying a tasty bowl of mussels in sauce (I don't know, just accept the weird simile and move on).

Punk, as I will call him, is very good in the lead role. It's a bit hard to believe him as an ex-lawyer, although not impossible, but he's excellent in the many scenes that have him on his own in the house, dealing with slight feelings of unease while he gets the repairs done. Dunn does well in her role, although she's used for most of the runtime as a motivating presence without actually being present. Sarah Brooks is believably tempting as a young woman who turns Don's head, Travis Delgado does well with the small amount of screentime he has as Milo, an ex-colleague who turns up to help with some of the repairs, and Karen Woditsch is excellent as a neighbour who knows how the house can affect people.

There are a number of different writers involved here. It's based on a story by Paul Johnstone and Ben Parker, with Stevens then adapting the material into screenplay form and doing his best by it in his directorial role. There may be a few too many tics and twitches in the character of Don (not literally, but you'll know what I mean when you see the film), and subtlety isn't a strong point at any time in the film, but this is a good horror that mixes in a lot of enjoyable little details with some bigger frights. The technical side of things is very good, the audio work is particularly impressive, and the 93-minute runtime is just right, allowing the fairly slim premise to play out well enough on the way to a satisfying final act.

Although not in the same league as some of the heavy-hitters in this sub-genre, Girl On The Third Floor is a nice blend of well-worn tropes overlaid with some modern sensibilities, all done in a way that still feels surprisingly fresh and energetic without feeling as if it is trying too hard, or overdoing things in a way to compensate for any failings. An easy one to recommend. 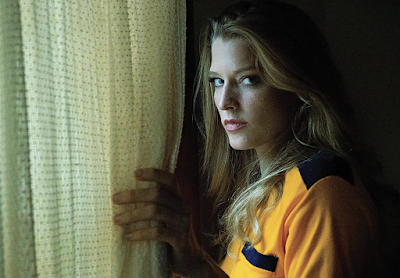