Barbara Crampton plays Anne Fedder, a woman who is married to Pastor Jakob Fedder (Larry Fessenden). Their marriage seems a bit stale, I think it's fair to say, and Anne has settled into a role that leaves her a bit (or a lot?) less satisfied than she should be. But that changes when she is bitten by a creature (Bonnie Aarons, working under a very impressive make up job). Anne may need to drink blood from others now, but she also has a confidence and aura that has been missing for many years. That changes her marriage, and not necessarily all for the worse.

Directed by Travis Stevens (who also helmed the very enjoyable The Girl On The Third Floor), and co-written by Stevens with Kathy Charles and Mark Steensland, Jakob's Wife is yet another fun film in a sub-genre that everyone assumes is dead until a fresh approach is presented. There are numerous elements and moments here that feel lifted from past vampire movies (e.g. how often have we seen someone be bitten and then try to satisfy their new urges with raw meat/blood from a butcher shop?), but the material is given a nice twist when the focus shifts to the state of the marriage between Anne and Jakob, using the bite itself as a metaphor for any big change made by a spouse that reinvigorates their mind and spirit.

It helps that the leads here are Crampton and Fessenden, with the former a particular boost to the production, considering I have been convinced for some time now that she has at least one bath full of blood a week to maintain her victory over the passage of time affecting us all. Crampton is fine while playing the more timid version of Anne, but she gets to have way more fun as her character blossoms. Fessenden is excellent, his character putting the pieces of a puzzle together while he wrestles with his conscience over the best way to move forward. Aarons gets to be the Nosferatu of this tale, and her physical presence is genuinely spooky and impressive. Nyisha Bell is a young woman who goes AWOL early on, and she does well in her role, and there's decent support from Sarah Lind and Mark Kelly, as well as a fun small turn from Robert Rusler.

Although never a film you would mistake for a mainstream studio horror movie, and I am not noting that here as any negative, Jakob's Wife is very well made throughout, from the visuals to the unintrusive score, by Tara Busch. There may be nothing here that stands out as being absolutely brilliant, aside from the core cast, but the script and direction are full of nice little touches, the pacing is pretty perfect, and the ending is deliciously dark and satisfying. What you have here is a good film that manages, thanks to the way it never once drops in quality, to become ever so slightly great. It's also interesting and fun enough to warrant more than one viewing, and I can easily see it becoming a film that some horror movie fans will choose to champion for the next few years. If it doesn't get the attention it deserves. So you can get ahead of the curve by giving it that attention now. 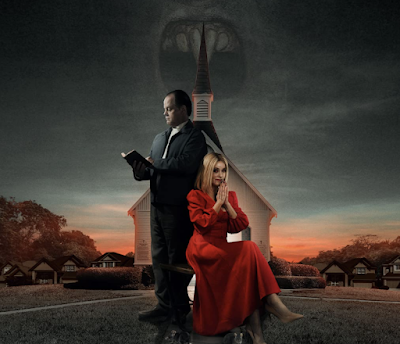