Anna Fritz (Alba Ribas) is a beautiful celebrity. And as this movie begins, you may not be surprised to know, she is dead. Her corpse is being held overnight in a hospital morgue before being further dealt with elsewhere. Pau (Albert Carbo) works at this hospital, and he receives a visit from two friends (Ivan, played by Cristian Valencia, and Javi, played by Bernat Saumell) before they are all due to go out partying. Which is when things start to get dark. Very dark indeed.

I'm not going to say any more about the plot details here because the less you know going into this movie the better. Suffice to say that this is a deeply unpleasant and uncomfortable viewing experience, to start with. But stick with it and you'll be rewarded with a damn fine, and extremely tense, thriller that rattles along nicely for the duration of its relatively short runtime.

Director Hector Hernandez Vicens, who also co-wrote the movie with Isaac P. Creus, skates to the very edge of what many will consider immoral and distressing before starting to then add complexity to the scenario and connect more strongly with viewers who will start pondering just what they would do if thrust into a similar situation (not that, I hope to god, any one of us WOULD be thrust into a situation like this).

All of the cast do a fantastic job, although I could easily make the obvious joke about Ribas corpsing on camera, and it's impressive to think about your opinions of each character at the end compared to how you may have been viewing them at the very beginning of the movie. I also won't be going into any more detail here because discussing the character developments could be as damaging to your experience of the movie as discussing the plot details. This is a film about a wild situation, about morality and consequences, and it moves from scene to scene thanks to the actions of the main characters.

Although it's no blockbuster, with the hospital really the only setting of the movie, The Corpse Of Anna Fritz never feels lacking in any way. The budget has been put to great use, with extra focus on the cold, impressive camerawork and framing. Moving between the morgue itself and some other parts of the hospital also helps to release viewers from any potential feelings of claustrophobia and think of the film taking place in a world other than just an unconnected independent movie universe (look, we all love independent movies but we've also all seen a number of films that take place in one room or building with nothing but stock footage trying to convince us that there's still a big world outside). 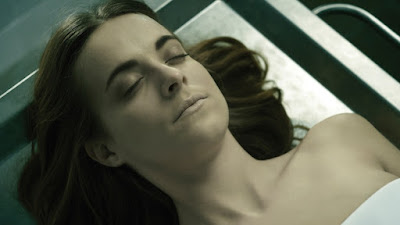