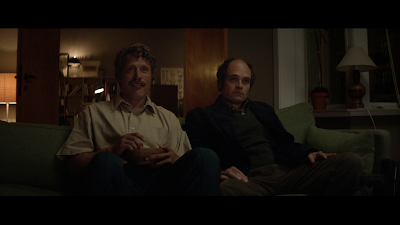 In some ways, Men & Chicken may seem an odd choice to close a horror festival like Dead By Dawn. But it doesn't take long to deliver the kind of content that you can easily see appealing to organiser Adele Hartley.

Men & Chicken may end up exploring some very interesting ideas about happiness and family, but it begins with scenes of a man visiting his dying father, slightly perturbed when questions are asked about the whereabouts of his brother, while another man attends a date with a wheelchair-bound psychotherapist, most probably because he thinks that a meal and evening out with the lady will be more rewarding, and less expensive, than actually paying for the therapy that he needs. And that's enough to warn viewers about characters they are about to spend the duration of the movie watching.

David Dencik and Mads Mikkelsen play those two men. They are two brothers named, respectively, Gabriel and Elias. Although brothers, their dead father informs them (through the medium of videotape) that they don't have the same mother. And their dead father isn't actually their father. This information sends them on a journey to discover just where they came from, why their father abandoned them, and whether or not they can do better than the miserable existence they seem to be wading through. It turns out that they have a few brothers, all easily identified by the fact that they all have harelips, along with one or two other abnormalities. 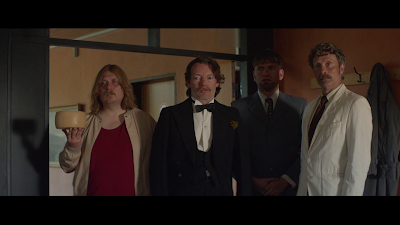 Travelling through territory that includes black comedy, seems to reference The Island Of Doctor Moreau, feels at times akin to The Texas Chainsaw Massacre, and wraps up a surprisingly optimistic core with surrounding layers of cynicism and despair, Men & Chicken is  a slow burn with many small pleasures despite having few surprises. It's certainly an unusual story, don't get me wrong, but most viewers should be able to realise where the third act will end up as soon as the movie starts to properly plot out the slight narrative.

All of the cast do a great job, but most of the laughs come from Mikkelsen, partly because his role here is so removed from other, more suave, characters that he's portrayed in recent years. Dencik also does a great job, despite being almost the straight man of the piece, but singling him out is slightly unfair to the others, who all get at least one memorable moment. Nikolaj Lie Kaas, Soren Malling, and Nicolas Bro may not be recognisable names, at least not to general audiences outwith their home countries, but they easily hold their own.

It's slightly overlong, and strains at times to keep the viewer on board, but writer-director Anders Thomas Jensen manages to take all of the oddness and unpleasantness and turn it into something surprisingly . . . . . . . okay, maybe sweet is the wrong word, but it all feels very human during the final scenes, which is amazing considering the animalistic behaviour of most of the protagonists. 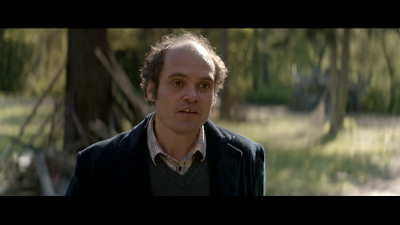 And that is it for another year at Dead By Dawn. Thanks, as ever, to Adele Hartley, her helpers, The Filmhouse team, and everyone who gets along to make the festival what it is. Even my loony mates.
Posted by Tylerandjack at 19:00