Jacob's Ladder is one of those movies that I missed when it first came out. And I didn't catch it until approximately fifteen years. I appreciate that many other movies came and went in that time that were influenced by this one, but I've still never quite loved it as much as many other horror fans. It's a good film, don't get me wrong, and the cast is a wonderful one. It's just never as horrifying or downright eerie as it could be, especially when you compare most of the movie to a few of the impressively unnerving images that are produced in the first half of the film.

Tim Robbins plays Jacob Singer, a Vietnam veteran who starts to have dark and unsettling visions that affect his health and daily behaviour. It's also making things difficult with his girlfriend (played by Elizabeth Pena). Are the visions the result of some experimentation on his unit during wartime? Are they signs of a mental breakdown? Or are they something more sinister?

Director Adrian Lyne works confidently here, and also makes popular that special effect that we will refer to by the technical term "really fast shakey head and blurry face moves". He doesn't rush things, even when the third act will probably be obvious to many viewers. This is a film more about the journey than the final destination, funnily enough, and that journey is interspersed with some fantastic phantasmagoria.

The script, by Bruce Joel Rubin, is equally confident, taking the time to flesh out a number of the supporting characters while leaving plenty of breathing room for the moments of tension and spookiness. In fact, it could bee argued that the main strength of the film is how it gets you to invest in a number of people who could so easily have been consigned to much smaller roles without any real damage to the central horror strand of the narrative.

That's also helped by the casting. Robbins has always impressed me in the way that he can equally use his full height to his advantage or fold himself up to make himself more vulnerable, depending on the role. This is somewhere in between, with Jacob a man who has clearly left his army days far behind him yet retains the strength to withhold a sustained attack on his mental faculties. Pena is a strong woman opposite him, alternating between sympathy for what Jacob appears to be going through and reminding him that she will only put up with so much shit. Elsewhere, Danny Aiello is a chiropractor who tries his best to guide Jacob through his dark path, Jason Alexander pops up momentarily to portray a lawyer who may or may not end up helping the ex-soldiers find out what was done to them, and Pruitt Taylor Vince, Ving Rhames, Eriq La Salle, and one or two others play the men who fought alongside Jacob in his platoon.

As influential as it is derivative, Jacob's Ladder remains an impressive horror that is relatively interesting and intelligent throughout, and also played completely straight. Which perhaps explains, more than the actual premise, why it went down so well in 1990, when first released. 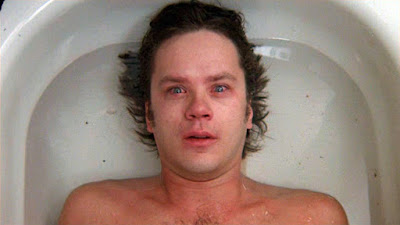