Written and directed by Nikias Chryssos, Der Bunker is a strange, dark comedy that the helmsman himself introduced at Dead By Dawn 2016 by humorously explaining that the audience was about to view a film about a typical German family. The characters featured here are anything but typical, of course, with even the more sympathetic individuals seeming to have left a few too many toys in their attic.

Pit Bukowski plays a young man who ends up renting a room in the bunker of the title. His room is spartan, with not even a window to the world outside. But this may be just the thing for him, as he throws himself into his work. Also inhabiting this strange home are a mother and father, played by Oona von Maydell and David Scheller, respectively, and their young boy, Klaus (played by Daniel Fripan). Klaus is, apparently, destined to become President, although this looks less and less likely when he starts to slide backwards in his home education. Mother and father decide that it might be best for the newcomer to teach their son, and it's not long before their demands start to strain both teacher and pupil.

Some people in the audience for Der Bunker didn't like it as much as I did. Some viewed it as yet another film doing little more than parading a bunch of freaks and weirdos onscreen with very little point to it all. And I can absolutely see their point. But this film really tickled me, and impressed me with the way it moved from strange to stranger to outright bonkers. And who says that every film has to have a point anyway?

While none of the cast have to worry about subtlety or nuance, they can't really be faulted for their performances either. Fripan is especially amusing as a boy who claims to be eight years old despite the fact that he's clearly much older. Bukowski is probably the next person to raise the most smiles, begining with an air of general bemusement until eventually succumbing to some of the strange ways that his hosts make seem normal in their home.

The title may bring about visions of drab colours and depressing brick and/or metal surroundings but it must be said that Chryssos also makes the wise decision to intersperse the bleaker scenes with splashes of colour, and even some lively and uncoordinated dancing. Oh, and there's also . . . . . . . . . . Heinrich (but you'll have to watch the movie to see what he adds to the proceedings).

And that's really all I have to say about this quirky delight. Well, that and the fact that if you can imagine Takashi Miike making a German movie then it may well end up exactly like this. Which I mean as a high compliment. 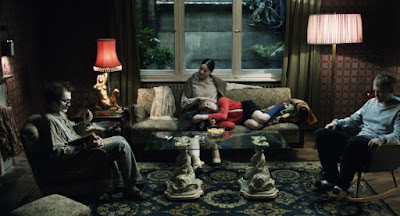