This review first appeared, in a very similar form, on Flickfeast. 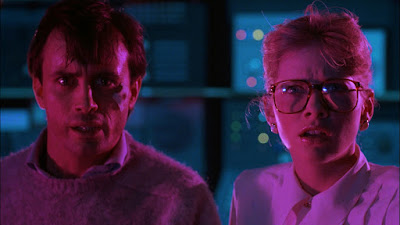 Director Stuart Gordon reunites a few cast members from Re-Animator (Barbara Crampton and Jeffrey Combs) in another movie based on the work of H.P. Lovecraft and while it may not quite reach the giddy highs that the exploits of Herbert West did, it’s a solid horror that holds up surprisingly well.

Starting off with a very similar short, sharp shock sequence a la Re-Animator, we get to encounter Crawford Tillinghast (played by Combs) as he escapes from an experiment gone awry that has resulted in the death of Dr Pretorius (Ted Sorel). Pretorius was working on an invention known as a resonator that would help to stimulate the pineal gland and show more of that which normally remains unseen all around us. It worked too well, unfortunately, and while seeing amazing sights those using the resonator also attract bigger problems. Barbara Crampton plays Dr. Katherine McMichaels, a misguided professional who thinks that the way to help Tillinghast (now staying in a ward for those with mental problems) is to take him back to the scene of the carnage, accompanied by a large security presence in the shape of Ken Foree, and to re-enact the experiment. Of course that should be a good idea. I’m sure nothing at all will go wrong with that progressive method of helping a person many have already assumed mentally unbalanced. Quelle surprise, things start to go bad and then go from bad to worse.

This movie is a whole lot of fun for fans of horror and fans of any of the lead actors. Taking a very slight Lovecraft tale as its basis, it does very well in using the central concept (and let’s not overlook the great Brian Yuzna’s influence in the writing department here) and expanding upon it to create something truly memorable and entertaining. The special effects vary throughout the movie but many of them are very well done indeed, and there are certainly one or two moments that will make you queasy if you’re not already TOO hardened to everything the genre can throw at you.

Gordon paces things perfectly with that great intro then a nice build-up interspersed by a few quick fright/shock moments until we get to an all-out insanely entertaining final reel that feels more like a Frank Henenlotter movie at times but is all the more fun for it. Revisit this film if you have not seen it in a while and, like me, you may be pleasantly surprised at how well it stands up. And newcomers? Give it a try, you may end up liking it too. Although, do be warned, it also feels very much of the '80s (which remains a big plus point for me, although some don't view things the same way).

One final note . . . . . for one scene alone, seared on my memory at a tender age, this remains the lovely Barbara Crampton’s finest hour. Fans will already be smiling in acknowledgement while all other red-blooded males should definitely check it out just to fall in lust with the woman. What a gal.

From Beyond was followed up in this late late Dead By Dawn 2016 show by the superb Dead & Buried. I admit that my eyelids didn't allow me to stick it out until the end, but here is my review from my last viewing of that particular slice of horror greatness. 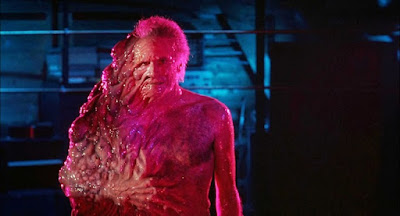