The story, in brief: Freddy Krueger is an incarnation of an ancient evil, according to Wes Craven (played in the film by . . . Wes Craven), and the stories/movies were actually keeping him somewhat in control but now that he/it is being left to rot away it is time for fiction to come crashing back into reality. What better way for Freddy to get back into our world than through Heather Langenkamp's young son, Dylan (played by Miko Hughes)? Reality is, after all, simply a cinema-screen's width away. And there's sometimes no better cinema screen than the imagination of a child.

This is an interesting, and sadly overlooked, entry in the franchise, that is of importance to genre fans who want to see the ideas in Scream before they became Scream. Craven uses this movie to explore the boundaries between reality and fiction and to subvert many of the horror clichés while at the same time using them to get classic scares. He also manages, impressively, to get Freddy (Robert Englund again, of course) back to being a genuinely scary figure. This is helped by Freddy receiving a makeover that makes him look even more evil than he ever did before. In fact, this and the "devil" Freddy look from FvJ are probably his scariest incarnations.

Langenkamp does slightly better here, playing a version of herself, but I still wish she'd never burdened the entire series with her presence. She's a great gal, and does well to revisit a character she could have ditched a long time ago, but there are many better actresses out there. It has to be said that everyone (Langenkamp, Englund, Saxon and even Craven, although he's the least of them) does well in bravely portraying versions of themselves. And Lin Shaye is back in a minor role, although she may be the only one returning from the first movie NOT to be playing themselves.

This movie, more than any other in the entire series, has intelligence, a great storyline and moments that offer something to really disturb most viewers (parents may feel especially unnerved with some scenes). It also has a number of great callbacks to the first movie and some nice references to classic "horror" stories, Hansel And Gretel being the most obvious one. The second best entry in the series and well worth giving another chance to if you disliked it the first time because it was "too different". 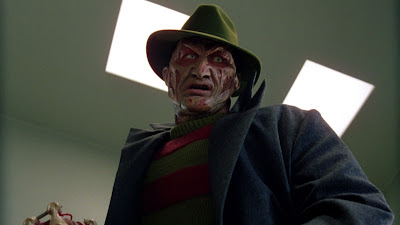