I REALLY want to punch Shane Twerdum in the face. REALLY HARD. That's nothing personal against Twerdum, although I understand why that would be hard to believe, but it's a testament to how great he is in his portrayal of a particularly reprehensible character in She Who Must Burn. Watch the movie and tell me I'm wrong.

Twerdum plays Jeremiah Baarker, a fanatic evangelist who ends up leading his "followers" to ever more dangerous and violent acts as they attempt to convince people that everything is part of god's plan. A woman should always do as her husband wants. Everything is justified if it is done in the name of the almighty. And abortion is a huge sin. It's this last part, more than any other, that drives Baarker again and again to butt heads with Angela (Sarah Smyth), a wman who offers advice to other women, and in some cases help to escape abuse.

There are a number of other characters mixed in to the plot of She Who Must Burn and I'm not ignoring them here as any comment on their depictions, or the talents of the actors in those roles. I'm simply choosing to focus on Jeremiah and Angela because they represent the eye of the storm here. Despite the two characters not actually sharing too much screentime together, relatively speaking, the film often feels like a two-hander in the way that it's either showing events as viewed through one filter or the other.

Twerdum may have been thinking of giving himself the best role when he wrote the script with director Larry Kent, but this never feels like any kind of vanity project. It's not even as morally simplistic as it could be, mainly thanks to a quietly audacious and thought-provoking finale that will lead to some interesting questions and conversations after the credits roll.

Smyth is also very good, despite the fact that she has the less showy role, and she's believable as a woman with no major aims or agenda other than helping out others in times of distress. She's obviously a strong individual, and this comes over in both her moments of comforting others and her confrontations with those protesting outside her home.

Abortion and religious extremism aren't necessarily ingredients for a fun time at the movies, and you'll struggle to come out of She Who Must Burn and tell others that you enjoyed it, in the traditional sense, but this is well worth your time. It's an interesting story, it's told well, and some of the attitudes on display serve as a sombre reminder of attitudes that we still need to, sadly, work against in these more (supposedly) enlightened times. 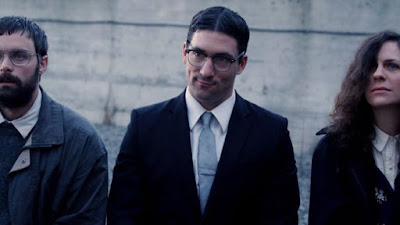