Like it or not, The Hills Have Eyes is arguably almost single-handedly responsible for the "hillbilly cannibal" subgenre that has given us the Wrong Turn series, Hillside Cannibals, Jug Face and the comedic stylings of Tucker & Dale Vs. Evil. It's also the film that saw writer-director transition from the down 'n' dirty roughness of The Last House On The Left to a more polished approach that we see him stretching his legs in some strange and unique genre fare before becoming the franchise-spawner that he was by the late 20th century (a status I would have to acknowledge here, after his passing).

A family are travelling through a remote area of America when they find themselves targetted by a bunch of savage hill-dwellers. And that's really all you need to know about the film. It's a very pure set-up, allowing Craven to continue his look at the thin boundary between civility and savagery while also providing more than a fair share of shocks and tense moments. The film has dated, that's true, but it retains a rawness and off-kilter aura that makes it easy to hold up as a bit of a classic, albeit one with a few forgivable flaws.

Dee Wallace is one of the familiar faces among the group of potential victims, and she's always good to see onscreen for genre fans. But she's joined here by John Steadman, Russ Grieve, Virginia Vincent, and a few others. It's the villains of the piece, however, who are the real headliners, as evidenced by much of the marketing material. James Whitworth is Jupiter, the head of the violent and deadly family living in the hills. He's memorable, and suitably scary, but it's Michael Berryman who is rightly remembered for his portrayal of Pluto. Berryman mixes his unique appearance with animalistic behaviour that makes him fascinating to watch, even as things start to get worse and worse for the poor family being besieged by savages.

If you consider yourself a horror fan then I consider this essential viewing. Not just because of the influence upon the subgenre already mentioned, but also because of seeing a stepping stone in the career of Craven. It's fascinating to see someone manage to tone down a cinematic primal scream into something more acceptable to mass audiences while somehow not diluting the power of his work. If only more knew how to do it. But, then again, that's why Wes Craven was as revered as he was. And rightfully so. 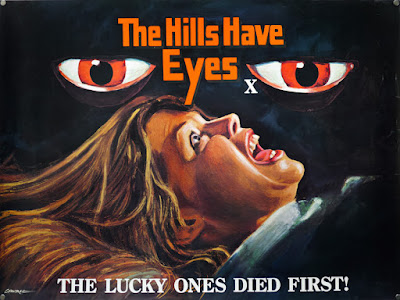