I went to see Bad Boys in the cinema when it first came out. That was twenty five bloody years ago. It was great fun. The film itself didn't do anything new, not really, but it worked so well because of the pairing of stars Will Smith and Martin Lawrence, as well as some great supporting players. I cannot recall when I first saw the second movie. Taking things up a level, it was a bombastic and entertaining flick, making the two movies a great double-bill. But nobody seemed to be crying out for a third, especially this far down the line. Well, nobody except maybe Martin Lawrence (who seemed to pretty much disappear after a number of star vehicles that showed how he worked best when paired up alongside someone more talented).

Life is pretty much the same for Miami detectives Mike Lowery (Smith) and Marcus Burnett (Lawrence). The former is still a cool ladies man, the latter is settling more and more into the content family life he hopes to embrace fully when he retires. Everything changes for them, however, when a mother (Kate del Castillo) sends her son (Jacob Scipio) on a mission to target and kill a number of people she has a vendetta against, including Lowery, who is to be left until last, after he has watched the others die.

It may no longer be Michael Bay at the helm (nice cameo though), but this has a touch of his style here and there to ensure that this third instalment fits perfectly alongside the others. You get plenty of shots that feel almost filtered directly through the Miami sunshine, you get at least one "Bad Boys" shot (you know the one, camera looking up at the main characters, moving around them as they grit their teeth and silently agree that shit just got real), and the action isn't afraid to pile up the bodies while anything flammable gets ready to explode. There's nothing here quite as over the top as the action set-pieces in Bad Boys 2, but that's not necessarily a bad thing. Every main sequence is very well put together, and the finale delivers something very satisfying.

Directors Adil El Arbi and Bilall Fallah do a great job of working the familiar elements into something both entertainingly familiar and yet also fresh enough to make it worth your time. The script, by Chris Bremner, Peter Craig, and Joe Carnahan, has the blend of action and humour you expect, and also brings in a main story strand that forces the main characters to rethink their whole approach to things.

Smith and Lawrence slip very easily back into their rapport, with both bringing out the best in one another, and a number of actors return from the previous two movies, not least of which is the great Joe Pantoliano as the put-upon Captain. There's a new team tasked with working the main case, headed up by Paola Nuñez, and featuring Vanessa Hudgens, Alexander Ludwig, and Charles Melton. All of them do well alongside the more seasoned stars. Scipio is a very believable threat at all times, and Del Castillo is a scarily single-minded mastermind behind the death and destruction.

Some people really LOVE the Bad Boys movies, and I'm not sure if they will enjoy this one as much as I did. I have tended to like them all about the same, each one has strengths and weaknesses, and this allows it to now be a superb action comedy trilogy. Will they go for a fourth one? Possibly. Will I watch it, despite reservations? Definitely. Whatcha gonna do?

https://ko-fi.com/kevinmatthews (you can help me pay for by Bad Boys purchases there, haha). 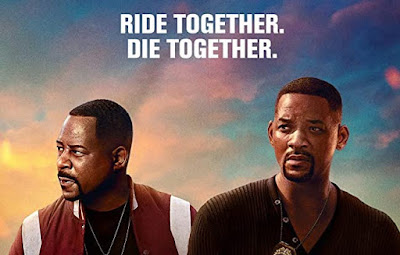