An anthology film that wants to revel in a sense of fun, and layers of meta self-awareness, Scare Package is, much like so many other anthology movies, inconsistent fun throughout. It's full of over the top gore and gloopiness, but it may pile things on a bit too thick for those who tire of it within the opening scenes.

There are two framing narratives, essentially. One involves characters who are a bit tired of having the same thankless roles in horror movie narratives. The other, and the one that continues to thread more throughout each tale, involves Chad (Jeremy King) talking over the genre rules with the newest employee, Hawn (Hawn Tran) in his videostore. I'm not going to detail every individual story, but most of them revolve around general skewering of very familiar tropes.

Despite the fact that it has a decent coating of technical proficiency, and that includes a talented cast all joining in with the fun, Scare Package is a hard one to really love. First of all, it's difficult to really decide whether or not it's being affectionate and knowledgeable, or whether it's concentrating on trying to be too smart for it's own good. Second, the separate tales feel far too close to one another, in terms of the ground they cover. They're all about the established rules, and focus on highlighting the ridiculousness of elements that we all take for granted, especially in slasher movies (which make up the majority of the runtime here).

On the other hand, considering how many different people are involved here, in both the direction and the writing I ended up counting about a dozen names, it's actually impressive that this manages to feel so silly and entertaining throughout, while also not feeling like any of those anthology movies created by making a patchwork of unrelated shorts. Aaron B. Koontz is responsible for the majority of the content, in terms of the framing device and a final tale, and he does a good job, but I'll also single out the sheer insanity of the segment "One Time In The Woods", written and directed by Chris McInroy, as a real highlight.

The biggest name onscreen is Noah Segan, and he seems out of place until you realise that he also co-wrote and directed his segment, which is a good way to get someone on board with an anthology movie. King and Tran are fun in their roles, but there's nobody here standing out for the wrong reasons. Mind you, fans of Joe Bob Briggs will also be delighted to see him appear in a cameo role.

I think, overall, Scare Package just drags itself down by being so unrelenting in the way it keeps insisting on unsubtly pointing out every single horror movie trope being made fun of. I would have liked some of the tales here to perhaps play out in a more straightforward manner, with the punchline then revealing a fun rug pull (a la The Babysitter Murders), but instead it feels like a bit of an assault on the senses from people shouting "it's META, get it?" for the duration of the whole film. 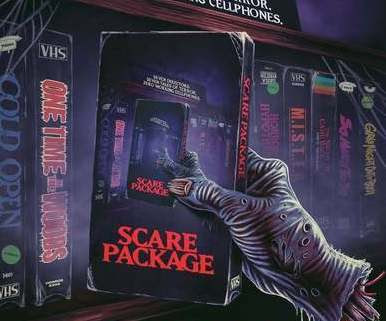