Based on the successful musical play of the same name, this was the second film to try and sell The Marx Brothers on the big screen, and it's a film beloved by many. You get a very slim plot, plenty of enjoyable lines of dialogue, and some fine moments for each of the brothers to show off their main talents.

Mrs. Rittenhouse (Margaret Dumont) is hosting a large party in her home. It's a celebration honouring the return of Captain Spaulding (Groucho Marx), with a big part of that celebration involving the unveiling of a newly-acquired painting. Some musicians turn up to help with the entertainment, with the two main players being Harpo and Chico, and Zeppo swans around being all Zeppo-ish, as usual. Will Captain Spaulding get through the party without upsetting everyone? Will Harpo and Chico get riches? Will the painting stay where it should be until the unveiling?

Where to begin with one of the all-time classic comedies? Is it okay to say I don't love it? I think so, especially because I don't love it. In putting the play onscreen, everyone involved has decided to just keep everything pretty much as it would be in a stage setting. That's all well and good when there's enough material carrying the movie along at a breakneck pace, which happens more often than not, but it makes things a bit clunkier when lines are delivered in a way to leave room for reactions that aren't really there as you sit and watch the movie in the comfort of your own home.

Morrie Ryskind is the main writer responsible, and was part of the musical play team, alongside George S. Kaufman, Bert Kalmar, and Harry Ruby, but it always seems like things are easier when dealing with a quality team like The Marx Brothers. You just need to get them in the right situation where they can cause the most chaos, all while Groucho gets to deliver the best one-liners.

Director Victor Heerman does well enough in the big chair, certainly throwing enough characters around our leads to keep up energy levels and potential for hijinks. The actual plot, which also revolves around a prank leading to the main painting being switched for a fake, is minimal, and there's a decent enough set-piece every 10-15 minutes to keep everyone happy.

There's not much point in mentioning the talents of the cast. They're The Marx Brothers, you know what you're going to get from them, and you get it. Groucho talks, Chico talks, in a way that doesn't sound as smart, but often gets him the right result, and Harpo does great work without any words. And you have Zeppo, swanning around being all Zeppo-ish. Dumont is good fun as the put-upon party hostess, Lillian Roth and Margaret Irving do well in smaller roles, and Louis Sorin and Robert Greig have their moments as, respectively, the art collector and the butler.

Just because I don't love it, and it's always making me slightly wary as I type that out, doesn't mean that Animal Crackers shouldn't still be held up as a bit of a comedy classic. It just happens to pale in comparison to the better films starring The Marx Brothers, the films that would come along soon after this one. 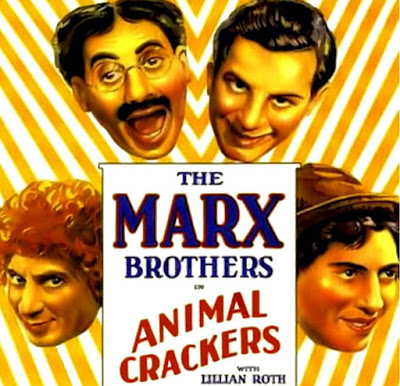