There's something within me that gets angry at me while I enjoy movies sometimes. Some small part of me that knows that I SHOULD know better. It tries to distract me with shame and inner turmoil and whispers of how inept I am. Even after all this time it still tries, despite knowing that it won't work. Especially while I watch something I enjoy as much as 2 Fast 2 Furious.

Following on, of course, from The Fast And The Furious comes this - a videogame in all but the formatting. But the videogames that it replicates are some of my favourites, the likes of GTA and Driver. This is the only reason I can give as to why I enjoy it so much.

To be fair, the cast is pretty good. Paul Walker returns as ex-cop Brian, and he's the star of the show (no Vin Diesel for this instalment), but he's ably supported by Tyrese Gibson (who is a LOT of fun), Eva Mendes, Cole Hauser, Thom Barry, James Remar, Devon Aoki, and a number of other good folks. And 'Ludacris'.

That videogame plot is summed up thus: Paul Walker and Tyrese Gibson are shown racing at different events before the action changes to an official police matter. Both men have to help the law get a charge to stick on their main baddie (Hauser) while racing around and avoiding being shot. That's it.

Michael Brandt and Derek Haas are the men who put their names to the screenplay here but it seems to me that they just squeezed in a few car chases in between guys saying "aaiiiiiiight" and "bro/bru" and plenty of cool handshakes and fistbumps. If you think I'm exaggerating then just monitor the dialogue for the first 20 minutes of the film. Aiiiight?

The cars look gorgeous, all pimped out and souped up, and the movie has a great energy as it barrels along from beginning to end. Many may dislike the editing, which is too hyperactive in places, but it fits in with that videogame aesthetic (the dialogue moments actually feel like "cutscenes" in between missions).

Director John Singleton may not be the most obvious choice for this kind of film but he handles it well and gives audiences a movie that won't disappoint those who know exactly what they want from the franchise - fast cars, simple language and a smattering of attractive women. Yep, you can happily switch your brain off as soon as you hear those engines being switched on. 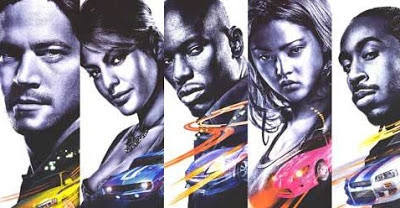