The kind of movie that used to crop up regularly on British television on a Sunday afternoon back when you only had access to four terrestrial channels and you spent half of your weekend either snoozing after a hearty lunch or creeping around those who were snoozing after a hearty lunch, Guns Of Diablo is an enjoyable enough time-waster that doesn't ever really do enough to earn itself a reprieve from the obscure status it now finds itself in.

Charles Bronson (aka THE Hollywood Cowboy) stars as Linc Murdock, a man who leaves his group temporarily to get supplies and sort out some affairs in a nearby town. He takes along a very young Kurt Russell (playing Jamie McPheeters) and the movie feels like a nice, pleasant family romp. Not for long though. Things take a turn for the worse when Linc spots the beautiful Maria Macklin (played by Susan Oliver) and we're then treated to a lengthy flashback sequence that explains their past. A past that's about to cause a lot of trouble for them in the present. Some think that Linc has debts to pay and they mean to collect.

Based on a novel by Robert Lewis Taylor, Guns Of Diablo is a mix of standard childish adventure and more serious adult gunslinger fare and the mix ends up detracting from the final creation. It's not energetic and innocent enough throughout to make the childish parts as enjoyable as they could be while the adult fare isn't quite grim and serious enough for fans of the Western genre who have already seen 101 movies using this familiar material to much better effect.

Director Boris Sagal and screenwriter Berne Giler don't add anything to the ingredients to help transform them but they're lucky to have Charles Bronson in the lead role and a very chirpy and likeable young Kurt Russell by his side. Susan Oliver is watchable enough, as are Jan Merlin, John Fiedler and Douglas Fowley, and the overall casting of the film provides the best reason for wanting to give it a watch. 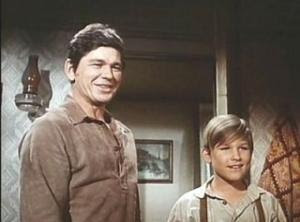