If you haven't heard of this movie then you've led a very sheltered life. Plan 9 From Outer Space is often referred to as "the worst movie ever made" and when you watch the thing you can't help but think of that title. It makes it hard to take the movie seriously and yet it also makes it hard to hate.

The story is standard b-movie fare in some ways - aliens come down to Earth in flying saucers, fly around scaring folks and also reanimate corpses to . . . . . . . scare more folks. The real laughs come when you find out the motivation for all of this and see/hear the plot developments during the second half. It's so preposterous that I properly laughed out loud on a couple of occasions.

The man behind this cinematic lowpoint is, as many of you will already know, Edward D. Wood Jr. AKA Ed Wood. He directed the thing, and shows some tiny iota of competence despite the cheap design, all-too-fake props, bad acting and lack of continuity, but he also wrote the thing, which helps to overshadow that one tiny iota of competence. I've seen a LOT of bad movies (and, for the record, I don't think this is the worst thing I've ever watched) but I can't think of any that have suffered from such a poor script. When the events aren't being narrated as they occur onscreen we get some of the most inane conversations that you'll ever hear outside of any live Big Brother coverage.

The cast includes the brilliantly-monikered Dudley Manlove, the lumbering giant known as Tor Johnson, an old and frail Bela Lugosi, the lady known as Vampira and a selection of other people, some of whom at least try to work with the absurd material and some of them who don't even seem to do that.

The special effects look like they've been made by someone who couldn't even win a Blue Peter badge for themselves, the actions of the characters are almost as bad as the lines of dialogue given to each, Tom Mason is a terrible stand-in for Bela Lugosi and the material bookending the main storyline is ridiculous. I'm sure there are people who could easily nominate this as the worst movie that they've ever seen but I'm not one of them. I was never bored and I couldn't help having some affection for this filmed failure. I still have to say that it's very, very bad though. Just not the worst. 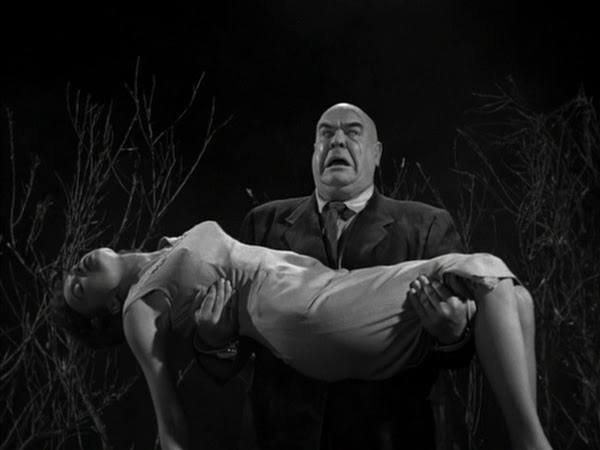