I can't start a review of Kelly's Heroes without first relating a memory. A memory that goes all the way back to my early teens when the home entertainment market was still lorded over by the wonder of VHS. In my home we had a copy of Kelly's Heroes. It was quite a good movie but back then I felt it was a bit long and it didn't hold my attention from start to finish in the same way as, for instance, Stir Crazy did.
One of my best mates, Robbie, loved it. Absolutely loved it. But he didn't have it in his house. He only had access to my copy (well, not MINE but you know what I mean). This meant that during our school holidays, when the Scottish weather was predictably dire, I watched a lot of Kelly's Heroes. As did Robbie. In fact, he even borrowed it for a few months and tried to watch it every day while he had it. Which tells you that this movie is one that some people just absolutely love.

For anyone who has seen Three Kings, this is a definite forerunner to that movie. Clint Eastwood plays Kelly, a soldier who luckily happens on some information regarding of a LARGE stash of gold being held behind enemy lines. Instead of the American soldiers fighting Germans without respite just because they're ordered to do so it becomes easier to motivate themselves when they know that they can make themselves rich. But it's obviously not going to be easy.

Written by Troy Kennedy-Martin (and, believe it or not, this wild ride has a basis in truth) and directed by Brian G. Hutton, Kelly's Heroes is a great mix of war movie, heist movie and standard comedy. There are, as my mate Robbie will testify, many quotable lines from the variety of characters onscreen. And what a collection of folk we have.

Eastwood is still at his squinty best, even if he is wearing military garb as opposed to a poncho or NY detective badge, while I just have to namecheck the rest of my favourites now so that I don't miss anyone out. Telly Savalas - brash and very likeable as Big Joe. Don Rickles - great fun as a man interested in making money who resents having to do some work for it. Donald Sutherland - stealing every scene that he's in as Oddball. Stuart Margolin - highly entertaining as Little Joe. There are also great turns from Carroll O'Connor, Gavin MacLeod, Hal Buckley, Jeff Morris and Harry Dean Stanton (billed here as just Dean Stanton). The more eagle-eyed viewers can also try spotting John Landis in an uncredited cameo . . . . . . . . . . . . . . . . . as a nun.

Watching Kelly's Heroes nowadays is a bit of a frustrating experience because I have to admit that, all those years ago, Robbie was right. He may have gone overboard with his love for the movie but it's a movie that deserves at least a bit of love and recognition. Give it a try and see how much you end up loving it. 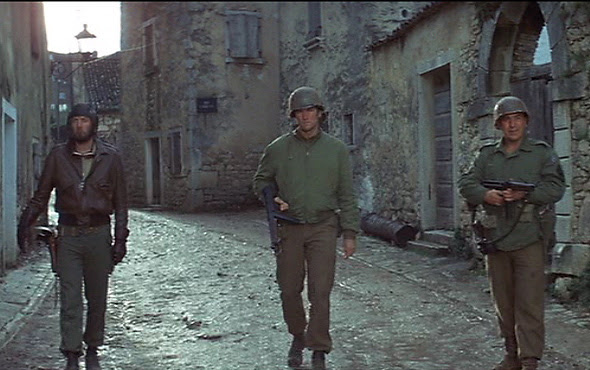