As prone to the whims of Netflix as many others who browse the service, I saw that Dead Man Down was on there are remembered that someone had once told me it wasn't a bad little crime thriller. It was, according to some of the ways I had seen it labelled, actually a neo-noir, which made this month as good a time as any to check it out. And whoever told me that it wasn't a bad little crime thriller was quite correct.

Colin Farrell plays a man working for crime boss Alphonse (Terrence Howard). These are bad people who do bad things. But Farrell has more secrets than most. And that allows him to end up in a position where he can be blackmailed by Beatrice (Noomi Rapace), a neighbour who wants suitable punishment to be administered to the man who disfigured her in a road accident. Farrell is working on a masterplan that is now due to be complicated, Rapace grows closer to him as they prepare to deliver the payback she feels that she needs, and Howard and his crew (including Darcy, played by Dominic Cooper) start to "draw the wagons into a circle" as they deal with someone trying to cause division and death among their ranks.

Perhaps wrongly marketed at the time of release, I recall a lot being made of the fact that this from the director of The Girl With The Dragon Tattoo (which gave Rapace her star-making turn) and I think there was a trailer that emphasised some of the action moments, which is what trailers do. I liked The Girl With The Dragon Tattoo, but didn't love it. And I wasn't willing to rush out and see Colin Farrell in another action thriller that wasted his talents in the middle of some bland mess. I believe others may have felt the same way (and we can all be thankful that we've had so many better performances from Farrell over the past decade since people stopped trying to sell him in those roles), but don't let that put you off.

Niels Arden Oplev does another good job in the director's chair, giving the film a similar look to his previous outing, but with more rays of light shining through here and there. The script, by J. H. Wyman, who has more experience with TV work than movies, is as good as it needs to be. Based around that old chestnut of "if you set out for revenge then you'd best dig room to serve two cold dishes", or something, the central pairing of Farrell and Rapace works well enough to have you worrying as it looks less and less likely that anything will lead to a happy ending.

Speaking of the two leads, they both do very good work here, even working at various times with various accents. It also helps a lot that the supporting cast has some great players mixed in. Howard and Cooper have large roles, but there are also smaller turns for Isabelle Huppert, F. Murray Abraham, and the always entertaining Armand Assante. A lot of the other cast members are generic gang member types, but that is perfectly fine when you are just waiting to see the bodycount go up and up on the way to a tense third act.

Not an easy film to assume that others will enjoy as much as I did, I still recommend checking it out. The 2-hour runtime flies by quickly enough, the familiar plot is handled well, and there are some surprisingly satisfying moments of violence as soon as the motivation for everything becomes clear.

You can buy the movie here.
American friends can pick it up here. 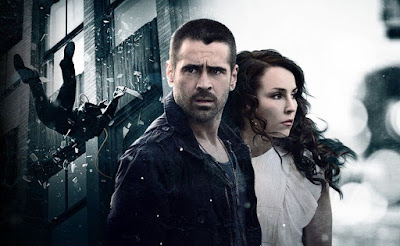