Here's a strange bit of personal trivia to start things off today. Although I had heard of Hedy Lamarr over the years, and I MAY have first heard the name utilised in Blazing Saddles, I had never seen her in a movie. I could be forgetting something, it happens, but I really think that this is the first film I have watched featuring her in a main role. And I couldn't have made a better choice. Well, that's very debatable when considering sheer cinematic quality. But it's less debatable when you consider the plot details here, and pair that up with the reputation of someone who is credited with a frequency hopping radio system that is used today in WiFi, Bluetooth, and more.

So . . . what's it all about? Why am I so happy to have started with this? Well, it's all about Ms Lamarr, who plays a woman named Madeleine Damien, heading off to start a new life with a new identity. This is all for the sake of her mental health, and can you guess what has caused her to have such a problem? She's being viewed with disdain because she has been seen as someone who doesn't mind partying, and doesn't need to just stick to partying with one guy. Yes, the more things change, the more things stay the same. Dishonored Lady is a noir film revolving around the core idea that Hedy Lamarr is slut-shamed into starting a whole new life. Anyway, it works out well. She meets the lovely Dr. Cousins (played by Dennis O'Keefe) and the future looks bright. But her past isn't quite ready to stay in the past, and those who knew Madeleine before cannot believe that she has changed all that much. There's an attempt to ruin her happiness, there's a fair bit of alcohol, and there's a dead body, one that leads to an embarrassed Madeleine having to bear witness to a trial that seems more concerned with her lifestyle choices than any actual motivation for murder.

Based on a play, and adapted for the screen by Edmund H. North (who also happened to write one of my favourite films of all time, The Day The Earth Stood Still), Dishonored Lady is a simple and effective little thriller that also ticks some of the boxes to qualify as a noir. You get the moral shadiness, and that's without considering how '40s audiences may have viewed the central character, you get various people scheming to get results, and the corpse turns up just in time for the third act to step everything up.

Director Robert Stevenson handles everything well, making the most of his cast to easily further move away from any potential staginess in the material (and, kudos to North, there is plenty done in the adaptation to add some cinematic quality to everything). It's not flashy or overly complicated, Stevenson is a professional who keeps this focused on the main character, her journey and her big dilemma.

Lamarr is fantastic in her role, and I'll be seeking out more of her movies whenever I remember to make the time for them, and O'Keefe does well as the nice and proper love interest. John Loder and William Lundigan have two vital supporting roles, they do fine, while Morris Carnovsky has to be the exposition for a couple of main scenes in which he portrays the doctor who has tried to help Lamarr move on from her "unhealthy" past. And Margaret Hamilton is good to see in a small role, playing a landlady who likes her tenants but doesn't like the turn of events when the police come calling.

I can see people dismissing this easily enough. It's never all that gripping, it's essentially a love story interrupted by a bit of drama (as opposed to a noir with some chemistry between the leads), and there aren't enough big names padding out the cast list. It just all worked for me, thanks to the parallels you can make between attitudes of yesteryear and attitudes of today, and thanks to the central performance from Lamarr.

There doesn't seem to be any decent disc release for this, which is a great shame. Surely some major Lamarr retrospective boxset is out there, or due at some point. 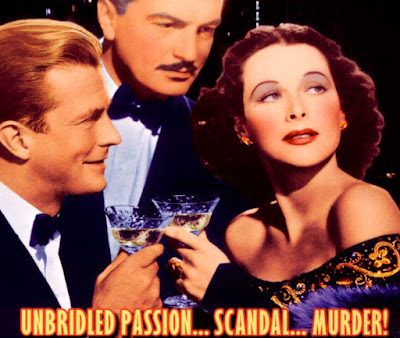