I REALLY enjoyed The Woman In The Window, despite the fact that the very end of the movie reveals it to be a much lighter affair than the rest makes out (an ending perhaps imposed upon the film-makers, or perhaps it's a grace note they enjoyed after a particularly downbeat finale). I'm starting this review by discussing the end because I think it could be a bone of contention for many, a decision that spoils their enjoyment of what they might otherwise view favourably.

But let's get back to the beginning. Edward G. Robinson is a psychology professor named Richard Wanley. We see him parting from his wife and children as they head off on a holiday, and he then meets his friends in a cosy gentlemen's club. Drinks and conversation flow. When Wanley heads home late in the evening, he stops to admire the painting of a woman in a nearby shop window. Which is when he meets Alice Reed (Joan Bennett). She looks like the woman in the painting. It's not long until she also looks like a lot of trouble, when she invites Wanley back to her place for drinks, only for them to be interrupted by an angry lover. A death occurs, and Wanley then needs to do his utmost to dispose of the body and cover up any evidence. Will anybody even miss this man? Will they be able to figure out what happened? Wanley can stay in the loop as he hears about current police efforts from his friend, a D. A. named Frank Lalor (Raymond Massey).

Written by the talented Nunally Johnson, adapting a novel named "Once Off Guard" by J. H. Wallis, The Woman In The Window is a film that weaves tonally between moments of amusement and darker events, with everything growing incrementally more and more tense on the way to the finale. It's never flippant, but it's very easy to stay on the side of a central character who made one mistake and then just keeps making things worse for himself.

Fritz Lang is in the director's chair, with this being during a period of time during which he seemed to be churning these films out. It's a super-light concoction when compared to his absolute classics, but that makes it no less worthy of a place in your viewing schedule. Okay, maybe a little bit. I'd say it's still well worth checking off your list though, as are many of the "lesser" titles in his filmography.

Robinson is excellent in the lead role, someone who takes a wrong turn up a one-way street and keeps trying to carefully turn himself around while the walls just keep closing in. Bennet is also very good, posited as the femme fatale of the plot, but almost as much a victim of circumstance as Robinson, although it's worth noting that she is ultimately responsible every time things go from bad to worse. Massey is an exemplary and upstanding citizen, blissfully blinkered to just how guilty his friend looks as the evidence starts to pile up, and Edmund Breon is the other main friend, equally blind to the guilt of a friend, despite occasionally commenting on some remarkable coincidences.

The runtime is 107 minutes, yet this feels like a shorter film. The pacing is perfect, viewers remain completely invested in the fate of the lead character for every minute of the post-death runtime, and it's good to have the one-two punch of the ending that lets you experience two extreme reactions to the material. Although, as mentioned, some may strongly disagree on that.

There's a lovely disc available here.
Americans can get a disc here. 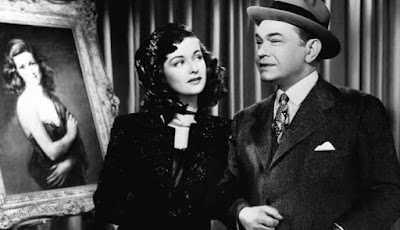