The first theatrical feature film directed by Danny DeVito, after some years spent honing his craft on TV episodes, shorts, and a few TV movies, Throw Momma From The Train hints at the knack he has for black comedy. It's not as good as most of his other films, lacking the sharp teeth he would grow less afraid of in future works, but it's still a fun idea made into a decent diversion.

Taking a cue from Strangers On A Train, this is the tale of two individuals who have murder in mind. Billy Crystal is Larry, a frustrated writer who now spends his days teaching other amateur writers how to start on their journey. He's frustrated because his ex-wife (Margaret, played by Kate Mulgrew) has made herself a name and fortune by putting her name to a novel that he wrote. Owen (Danny DeVito) is attending Larry's class, and he's frustrated by years spent living with his horrible and abusive mother (Anne Ramsey). Taking some advice from Larry, who is just trying to basically shoo him away, Owen ends up in a cinema that is screening Strangers On A Train. He thinks this is an unsubtle hint from Larry, and begins plotting to kill Margaret, which would mean Larry could then kill his overbearing mother. Nothing goes to plan, especially when it comes to the fate of the unstoppable force that is momma.

Despite the strength of the two lead performances here (Crystal and DeVito work very well off one another) there's not enough that can be done to lift the material above the script, written by Stu Silver. Silver doesn't have the most extensive filmography, and this is the only full movie he is credited with. His relative inexperience shows, although I understand that there may have been spaces left in which Crystal and DeVito could riff and work in more laughs. That's all well and good when enough magic is made to fill up the runtime, but otherwise it's not ideal.

There are also not enough great moments, or care, given to the supporting cast. Ramsey is superb, but she is required to do nothing more than be gruff and gravel-faced again (her characters is essentially Ma Fratelli in need of a full-time carer), and Mulgrew has a lot of fun saying lines and acting in ways that constantly get Crystal more and more enraged. Kim Greist is sorely underused, playing a colleague who agrees to date Crystal, and the same can be said of Annie Ross, Rob Reiner, and Oprah Winfrey (the latter two being used in amusing cameo roles).

So, in case it wasn't clear from the previous two paragraphs, the biggest thing working against the movie is the fact that it's too lightweight. In fact, the central concept, which remains a fun idea to rework, ends up feeling as if it could just as easily be slotted into any sitcom special episode. The ending doesn't help either, further showing that this is a dog barking at everyone to keep them at a distance from which they can't see a mouth full of false teeth.

DeVito shows a capability in the director's chair that would help him over the next couple of decades (with better efforts from him including The War Of The Roses, Matilda, and, my personal favourite, Death To Smoochy). It's just a shame that he didn't have enough faith in his cast, and himself, to make this darker, and potentially a lot funnier, than it is. 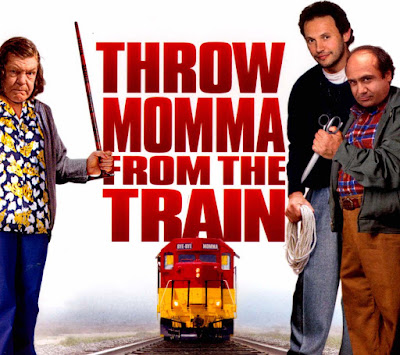