Roy (Joan Cusack), Lilly (Anjelica Huston), and Myra (Annette Bening) are three con artists, and they're working on different levels. They're also connected in ways they might sometimes wish they weren't. Lily is Roy's mother, although she hasn't been in his life for many years, and Myra is his girlfriend. There's trouble brewing when these three end up in the same space together, and a chain of events start to unfold that is both dark and tragic, and also sadly inevitable.

Directed by Stephen Frears, The Grifters remains one of my favourite neo-noirs and one of my favourite con movies, and I do love me a whole load of con movies. I was absolutely blown away when I first saw it, over two decades ago, and the passing of time has done nothing to dull the power of the final scenes.

Based on a book by Jim Thompson, the script by Donald E. Westlake (no stranger to writing some gritty crime fare himself) manages to consistently entertain and inform while viewers also see (and hear, thanks to the great score from Elmer Bernstein) those big storm clouds gathering. Even the earlier moments of darkness, such as a character receiving a blow to the stomach so hard that he develops some internal bleeding, have a lighter touch before the world that these characters inhabit starts to oppress and restrain them further, trying to forcefully imprint on them the fact that there's no escape for anyone who has spent so long living that lifestyle.

Despite his many iconic roles over the years, Cusack gives a performance here that easily sits alongside his very best, and it is always a pleasure to be reminded of the time he used to seem to care about his work. His effortless cool is tempered by his baby-faced looks, allowing him to maintain an innocent and friendly manner with anyone he decides to try and wring some money from. Bening is just as smart and savvy, in many ways, but uses her looks and sex appeal to get what she wants, and she also delivers a top performance. Then you have Huston, a veteran who knows that her days may be numbered. How much can she put away before then? Is it even possible for her to get out? This constant scheming, and desperation, informs the superb performance from Huston, and Lilly is one of many brilliant characters she's given us over her career, a devious monster that will turn your stomach by the time the end credits roll.

Stephen Frears seems to enjoy leading viewers into the world of these characters, showing us the art of the cons with no small amount of admiration for those with the skill and, well, confidence to pull them off. It feels like most of the work has been done before the cameras even started rolling, between the superb casting and the choice of everyone working behind the camera, from the writer to the editor, etc, and the final product falls just shy of being a flawless classic.

As a major bonus, you also get supporting turns from Pat Hingle (playing the boss Lilly works for), J. T. Walsh, Charles Napier, and small amounts of screentime for Stephen Tobolowsky, Sandy Baron, Xander Berkeley, and Jeremy Piven (blink and you may miss him though).

A tough film to recommend to people, due to the dark nature of the content, but I do so anyway. You won't be grinning and ready to skip back to the real world straight after you've watched it, but you may well find that you have a new favourite film. 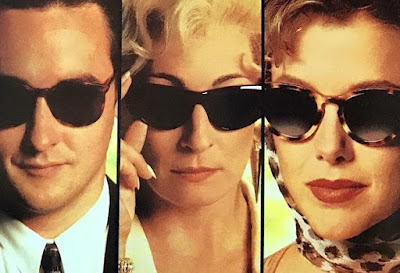