Director Alfred L. Werker may not be a name all that familiar to you, but you may know some of his work. He directed 50 movies, and most people who enjoy exploring the annals of cinema will have heard of at least two of them (The Reluctant Dragon and It Could Happen To You).  Having seen only one of those films myself, the Disney one, I can only say that this fun little thriller has made me keen to seek out more of his filmography.

Anabel Shaw plays Mrs. Janet Stewart, a loving wife who suffers a major shock while waiting for the long-overdue return of her military husband (Lt. Paul Stewart, played by Frank Latimore). She witnessed the murder of a woman by her husband, Dr. Cross (Vincent Price), and this causes her to become unconscious. When others discover her in this position, they want her to get better as soon as possible. And the best person to hand is the skilled . . . Dr. Cross.

Fairly predictable from the opening scenes, mainly because of the baggage that the wonderful Price brings to every role, Shock still manages to keep viewers slightly on their toes as things move towards the expectedly tense finale. Mrs. Stewart may be struggling to extricate herself from a very bad situation, and nobody believes her when she finally starts to tell them what she saw, but the good doctor finds himself equally wriggling on the end of a hook, with the investigation into the death of his wife turning up one too many details and coincidences to allow everything to be brushed under the carpet and forgotten about.

Written by Eugene Ling, with some additional dialogue from Martin Berkeley (developing the story by Albert DeMond), Shock is a perfect balance of silly and sharp. Even the title itself sums this up. It's wonderfully simplistic, considering the state of our lead, but also comes up again as Price suggests a radical treatment of insulin shock therapy to help "cure" his patient.

Werker bounces from scene to scene with an energy and sense of fun that, given some more room to breathe, could have easily been described as Hitchcockian at times. Indeed, this is one of those thriller in which the viewers know the bomb has been placed and are simply kept on tenterhooks while they wait for it to explode.

Price is, in case you ever doubted it, excellent in his role. He may be someone who feels that he was pushed into his actions, as opposed to a proper moustache-twirling villain, but that doesn't make him any less evil once he resolves to do whatever is necessary to keep himself safe. Shaw may spend most of the movie in a relatively prone state, but she's good in her role. Latimore is the dependable and caring husband, although he's not quite caring enough to believe the word of his wife over that of a trained professional feeding him a line of BS (ahem, oh well, thrillers have to often be based upon such conceits), and Lynn Bari is very good as Elaine Jordan, the colleague and cohort of Price.

It's as unpretentious as so many other noirs are, clocks in at a very acceptable 70 minutes, and has some moments that could easily have been dressed up in gothic robes and pushed from the realm of thriller into outright horror. In other words . . . this is a little gem. It's the sort of title I would love to see get polished up, nicely packaged, and presented to film fans who take to it as quickly as I did. 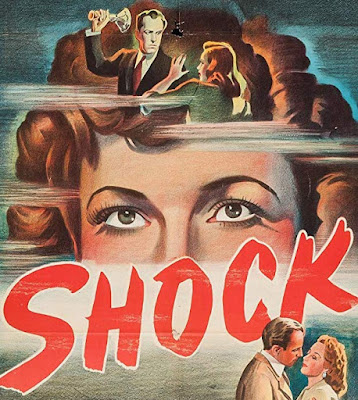