Serenity is, in a way, kind of wonderful. It's terrible, and I really can't think of anything I've seen with worse plotting that hasn't been buried in the recesses of the darker pockets of the internet, but it's the kind of terrible that makes you wonder why nobody took people aside at any stage in the film-making process and said "look, this isn't working, we need to start over".

Matthew McConaughey is Baker Dill, a fishing boat captain who enjoys a fairly tranquil life on a small island. He's obsessed with catching a large yellowfin tuna, which he names "Justice", and sometimes even moves paying customers out of his way when the fish comes within catching distance. Things take a turn for the worse when Baker's ex-wife, Karen (Anne Hathaway), approaches him with an offer. She wants him to kill her abusive new husband (Jason Clarke), an act that would improve the life of both her and their son.

Written and directed by Steven Knight, who previously surprised me by making a film about a man driving his car and planning a major concrete transporting job (Locke), this reflects poorly on him, and also everyone involved with it. The script is a mess, with the best moments coming from the scenes that provide unintended laughs, and the direction complements it perfectly. Knight doesn't settle on any style. If you want something dark and shady to match the mystery at the heart of things then you're going to be disappointed. Similarly, anyone hoping to at least get a hot and sweat-soaked thriller reminiscent of Body Heat and The Mean Season will also end up disappointed. In fact, it's hard not to think of anyone who won't be disappointed by this.

The cast at least look as if they're having fun, for the most part. Hathaway is the one with the least to do, despite how she sets the chain of events in motion, and suffers from a script not savvy enough to either drag her down to a sleazier level or keep her above it all. McConaughey is enjoyably over the top, more invested in catching one big sea creature than anyone else I can think of (aside from Ahab or Quint, obviously). Clarke's character is so awful that it's fun to watch him swagger about onscreen and act oblivious to the immediate dislike that others have for him. Djimon Hounsou works well in a supporting role, he's the first mate to McConaughey's character, but the same cannot be said of Jeremy Strong or Diane Lane, who is completely wasted in the couple of scenes that she has.

There may well be individual aspects of this movie that some people end up enjoying. Maybe you like the standard noir idea at the heart of the plot. Maybe you just like McConaughey and/or Hathaway. Maybe you like seeing footage of people on a boat as they wait for a fish to take some bait. Whatever you find to enjoy here, I defy you to hold on to that enjoyment as everything gets sillier and sillier in the second half, leading to a finale that it's pretty much impossible to care about.

I have spent a lot of time since watching this movie trying to think up ways of how I could have turned it into something worse. I am so far drawing a blank. 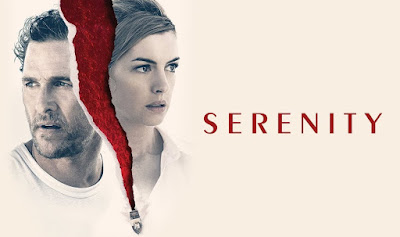