Although not at the very top of the film noir tree (which is like a normal tree but . . . extra shady), The Big Combo is a dark and thrilling crime pic, one that depicts a battle of wills between a good cop and a very bad crook, with the latter always seeming to be one step ahead of the former.

Cornel Wilde is Police Lt. Leonard Diamond, a cop obsessed with bringing down a dangerous gangster named Mr. Brown (Richard Conte). It would appear, at least initially, that the key to bringing down Mr. Brown lies with a woman in his past, Alicia, and Diamond puts more and more people in danger as he continues to circle closer to the truth.

Directed by the prolific Joseph H. Lewis, and with a script written by the equally prolific Philip Yordan, The Big Combo is a film made by people who know just how far they can take things to make viewers uncomfortable without stumbling into territory that many would find distasteful. It feels nasty and vicious throughout, and the main protagonist often feels in very real danger, but it also uses a number of the tropes of noir to somehow make you more comfortable while the events unfold.

This is all aided by the main performances. Wilde is solid and upstanding in the lead, so much so that while you worry for him you can also sense that he will make it through whatever happens and come out of the other side okay. Conte exudes complete confidence, and menace, throughout, which also makes it possible that you could reach the end credits without seeing him receive the justice he deserves. Brian Donlevy is very good as the right hand man to Brown, named Joe McClure, and the main female characters, portrayed by Jean Wallace, Helen Walker, and Helene Stanton, are all absolutely pivotal to the storyline, in different ways. The supporting cast also includes the likes of Robert Middleton, Jay Adler, John Hoyt, Earl Holliman, and Lee Van Cleef.

Released in 1955, towards the very end of what many view as the classic period for film noir, this is a film that manages to play around with the familiar without warping any of it. Everything that you expect is present and correct, but it's not necessarily in the classic form that makes it easier to notice. The weakest element, sadly, is Yordan's script, which does a good job with the characters and most of the plotting, but fails to have that sizzling heat that the best noirs had. I cannot reel off any truly memorable lines of dialogue from this, and my ears didn't perk up during any particular exchanges. There are many good lines here and there, but nothing truly great.

Is there such a thing as a bad film noir? If there is, I cannot think of any that I have discovered yet. Maybe I have just been really lucky so far. The Big Combo is another good one. It just suffers in comparison with many of the better, and better-known, titles that I've already seen. I still recommend it to fans, as long as you've watched a number of the more celebrated noirs before you get to it.

There's a nice disc here for you. 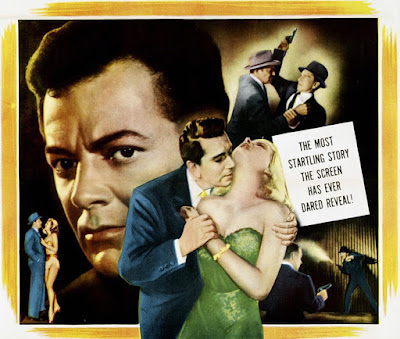