You'd be forgiven for thinking, from the title alone, that this was some kind of forerunner to the modern teen sex comedy but the reality is far from it. This is an Abbott & Costello vehicle and it's quite a good one. It may not be one of their best but it's certainly a welcome step back up after the dismal Lost In A Harem.

The movie begins with Bud and Lou, wouldn't you just know it, losing their jobs and coming up with a great way to get themselves located in an all-new location where they can mess things up. The duo become caretakers at an all-girl school while Bud tries to look after the best interests of his sister (Molly McCarthy, played by Martha O'Driscoll). There aren't that many laughs specifically using the location, though one great scene sees Lou getting in quite a panic while he tries to help Patty Gayle (played by Peggy Ryan) avoid being caught in his room, but there are some great set-pieces throughout this fairly enjoyable confection.

From the opening scenes, with Lou getting himself in trouble through no fault of his own, to a calamitous attempt to clean up a kitchen and then on to a joke about a whale, a stool and some apples before leading up to a grin-inducing basketball game, Here Come The Co-eds gets the balance just right for most of the runtime.

Musical interludes from Phil Spitalny And His All-Girl Orchestra and Evelyn And Her Magic Violin aren't as enjoyable as the comedy moments but they're not painful to sit through either. And the banter between Bud, Lou, O'Driscoll, Ryan and a hilariously irate Lon Chaney Jr. more than makes up for any weak patches.

John Grant returns to the writing duties, and also got a producer credit this time, and shares the load with Arthur T. Horman, building on the central concept envisaged by Edmund L. Hartmann. Jean Yarbrough has another turn at directing the boys and once again shows good judgment.

Overall, this is certainly one worth watching if you're a fan of A & C or just a fan of some fine comedy. 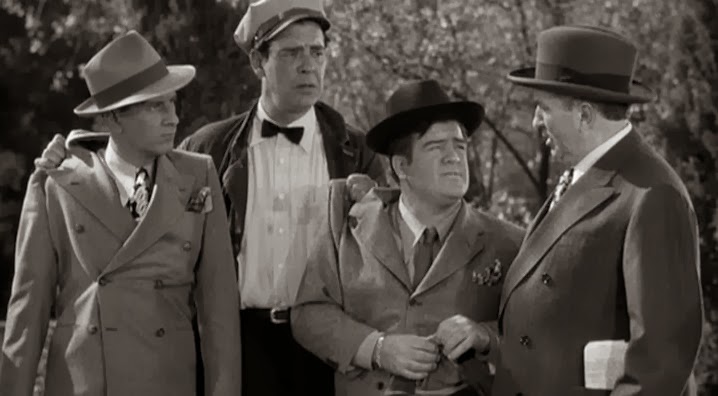