The last film in the original franchise, it's a shame that Death Wish 5 is such a damp squib ending the series.

Written and directed by Allan A. Goldstein, this sequel sees Paul Kersey (Charles Bronson in his final film role) returning and getting close to some people who you just assume are going to be hurt in some way. Right enough, the inevitable happens and Kersey goes into full-on gunhappy mode.

With a cast that includes Lesley-Anne Down, Michael Parks, Saul Rubinek and Robert Joy, this movie may have a familiarity factor that the others slightly lacked but it's offset by the fact that it's slightly below average from start to finish. The film even loses the vibe of borderline exploitation nastiness that the preceding four movies had, making it nothing more than a standard revenge action movie that fails to stand up alongside many better films from the the time (ruled, essentially, by the likes of Stallone, Willis and Schwarzenegger defining modern machismo).

Charles Bronson is still highly watchable, and Michael Parks makes for a decent villain, but there's so little effort put in to the other aspects of the movie that it just feels lazy, tiresome and tired out. The violence isn't shocking enough compared to the previous films and the premise starts to become a bit of a joke, in many ways. Viewers most certainly considered the awful truth by the second or third movie in the series - being close to Paul Kersey is a very dangerous place to be - but it was often hidden behind the escalating violence and the quest for revenge that the central character would embark on. Sadly, there's just not enough going on this time around to detract you from thinking "actually, maybe Paul Kersey just shouldn't get into relationships".

The end of an era in many ways, and the last film role for Bronson, Death Wish 5 is just one disappointment after another. But it's not unwatchable and it doesn't take anything away from the many other great movies that gave us Bronson at his bad-ass best. 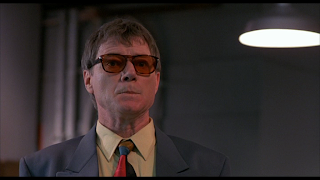