You see what they did there? Get the pun? If you're already groaning at the title of this movie then you're not going to enjoy the content. It's daft. The horror elements of the first movie have been pushed aside for more comedy and a strange fantasy adventure element that places the film between the likes of Labyrinth and the weaker Hammer movies that would use any excuse to send a hero into another world full of danger. To be kind, we can assume that the film is a homage to those older movies. It's just not a very good one (though I still hold on to the fond memories I have of the thing from when I was about 13 years old).

Much like the first film, events take place in a house. There ends all onscreen connection. This isn't even the same house, though some stock footage here and there tries to make it seem like it is. Arye Gross plays Jesse, a young man who finally moves back to the empty family home and finds that it's not actually as empty as everyone thought. So he and his friend (played by Jonathan Stark) decide to dig up the final resting place of his gramps and disturb the old man (played by Royal Dano), who proceeds to tell them all about the crystal skull he has guarded for many years and how it must stay safe in the house. Of course, next thing you know a load of random villains are trying to steal the crystal skull. With prehistoric creatures, a bunch of dangerous Aztecs, a handyman who is also an adventurer (John Ratzenberger, providing another link after the appearance of George Wendt in the first movie) and many decidedly 1980s moments, House II: The Second Story is still a fun watch but it's far from a great movie.

Ethan Wiley moves up from his writing position on the first film to both write and direct this outing and I suppose he does okay. The direction certainly seems pretty competent, even if the main premise is a bit ridiculous and far-fetched. It's just strange to think who he could have been aiming for when he wrote the thing. Horror fans will find it too light on any actual horror whereas fantasy adventure fans will almost certainly prefer numerous other movies with more spectacle onscreen.

The cast all seem to enjoy themselves, at least. Arye Gross and Jonathan Stark work together well, Royal Dano is very good, John Ratzenberger is a lot of fun, Dean Cleverdon is good when he pops up briefly as the real baddie of the piece and then we have support from Bill Maher, Lar Park Lincoln, Amy Yasbeck, Jayne Modean and other shiny happy people.

You might enjoy this film but if, like me, you have fond memories from seeing it when you were a lot younger then prepare for disappointment to sink in as you realise . . . . . . . . . . . . . . it's actually not half as good as you remember it being. 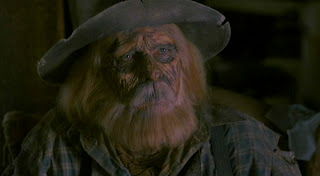