Try as I might, I just can't fully shake the feeling that I haven't actually watched Death Wish 3. As the credits rolled I had almost convinced myself that what had gone before my eyes couldn't have been anything else but a fevered dream full of crazy gunplay and heroic vigilante behaviour. My mind had somehow blended together Home Alone, *Batteries Not Included and Behind Enemy Lines. With a bit of Rambo thrown in there for good measure. Amazingly, it wasn't a dream. None of it. It was all real. Surreal yet real, all the same.

Charles Bronson returns to play, arguably, the role that defined him throughout the 1980s. He's Paul Kersey, a man pushed so far over the edge that he can no longer see where he used to hang on to any semblance of normality. Worries about going too far have been banished from his mind, he has returned to New York and is now a killing machine, secretly endorsed by police and dropped into an urban warzone like some OAP prototype of the T-101.

It's Michael Winner directing once again and Don Jakoby takes care of the writing duties (which probably just consisted of writing "punks kill people and upset Charles Bronson, who goes on a killing spree with increasingly-heavy artillery at his disposal). The essence of the movie remains similiar to that classic original film but, in oh so many ways, they are also both very, very different. America is not a country with a major crime problem that causes some upset this time, it's just one big gang-controlled area not unlike something normally seen only in the wilder movies from Troma. Old folks are hassled and hurt and even killed while eagerly awaiting a chance to draw blood and fight back. And thugs can actually call in other gangs of thugs whenever they need backup. In fact, I was quite surprised that this WASN'T a Troma movie. It certainly had the heightened lunacy throughout.

Bronson is, of course, very good in the lead role once again. Martin Balsam gets a decent bit of screentime, as does Ed Lauter. Deborah Raffin is shoehorned in there, her character almost laughable and completely unnecessary for most of her screentime. But that is more than made up for by Gavan O'Herlihy and his superb turn as the lead villain. Other folks get their chance to play scumbags but viewers of my age (mid-30s) will probably have the most fun watching another rare film outing for Alex Winter (aka the one who wasn't Keanu Reeves in the Bill & Ted movies).

For Jimmy Page fans, there is the extra enjoyment gained from the fact that he has returned to create the score after his work on the second movie.

I can't deny that I was entertained from beginning to end with this movie. I'm just not sure how much of that entertainment factor stemmed from the ridiculousness of the whole thing and the feeling of incredulity it filled me with. 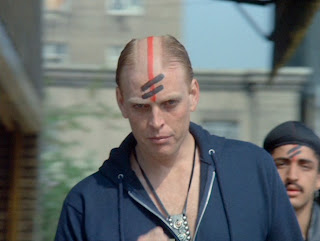