While it's far from the worst movie that Abbott & Costello ever did, and far from any of the worst movies that I've ever seen, I have to say that there was something about this film that just stopped me from getting into the fun that the leads were trying to convey. It's not all that good, to be honest, although one or two minutes stand out (most notably, a man driven to enraged acts of violence by the mention of a certain place name).

Bud and Lou upset quite a few people yet again and find themselves running around in the company of singer Hazel Moon (played by Marilyn Maxwell) and a prince (played by John Conte) trying to reclaim his throne from his evil uncle (Douglass Dumbrille gets to play the villain of the piece). That's about it. A flimsy film isn't always a bad thing, if there are enough of the other elements to fill the gaps - comedy or scares or action or decent musical numbers, etc depending on the film type. But this doesn't even have that.

There are a number of mediocre and unenjoyable musical moments so instantly forgettable that I'm actually pleased with myself for even remembering to mention them here, despite having just finished watching the movie. The verbal exchanges between Abbott & Costello aren't up to par, the unfolding of the plot is even more ham-fisted than usual. I'd even go so far as to call this one pretty damn lazy.

Director Charles Reisner seems to stifle any attempts made to raise the material up slightly, either by surrounding the better material with far too much dross or taking the few good moments and overrunning them by a good few minutes.

The cast aren't all that likeable, outside of our leads, and it's no surprise after seeing this film to remember how few films Abbott & Costello did with MGM. The studio certainly didn't know how to capitalise on the talents of their comedic leads. Even writers Harry Ruskin, John Grant (the writer who worked most often with the duo) and Harry Crane fail to bring anything to the table.

A bit of a dud, especially when compared to the few preceding movies that all seemed to have reached and maintained an enviable level of quality comedy. 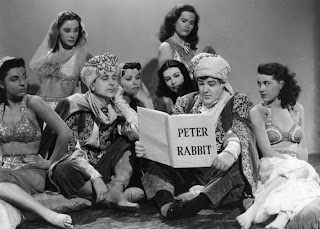