Not really tied to the series by anything other than name, but I suppose you could really say the same thing about the second movie, House III: The Horror Show is an inferior rip-off of a number of Wes Craven movies (mainly Shocker but also anything starring a certain Freddy Krueger) that benefits from some watchable actors in the main roles.

Lance Henriksen is a cop with frayed nerves, all because of the time he spent tracking down and bringing to justice a nasty killer (played by the late, great Brion James). When the criminal is executed by electric chair he doesn't go quietly shuffling off the mortal coil. Henriksen begins to fear for his family and his sanity as he sees the killer taunting him from beyond the grave.

You know that all is not well when one of the writers (Allyn Warner) prefers to be listed under the old pseudonym Alan Smithee. Leslie Bohem doesn't hide, which shows either remarkable faith in the material, remarkable bravery or remarkable stupidity.

James Isaac directs and puts together an entertaining mess with no real scares but plenty of random, wild moments that should please fans of the surreal. Brion James pops up to do a comedy routine at one point, his face appears on a turkey and he does plenty of nasty things to Henriksen's family.

Speaking of that family. Rita Taggart plays the wife and is fine, Aron Eisenberg acts as if he was created in a lab in a test-tube tagged as "essence of 1980s teenager" but everything is made better by the presence of the effervescent Dedee Pfeiffer (who really deserved more movie roles aside from the likes of this dross and the fantastic Vamp). Fans of Lawrence Tierney may want to watch this but be warned that he gets a very small amount of screentime. Thankfully, Brion James is in almost every other scene and goes completely over the top with his performance, which is immensely entertaining, while Lance Henriksen is as watchable as usual in the lead role.

I'm sure that some people will love this movie, if only for the interactions between Lance Henriksen and Brion James, but I'm equally sure that some will absolutely hate it. Me, I land squarely in the middle. 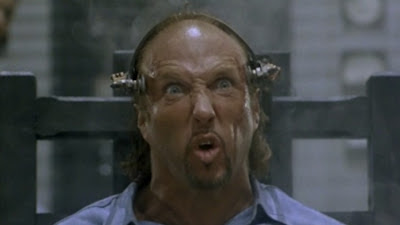