Not to be confused with the House AKA Hausu from 1977, any number of other movies called House or even the very popular TV drama show starring one Hugh Laurie as a grumpy but fiercely intelligent doctor, this House is a very enjoyable horror comedy that features some well-known horror genre names in the credits. Produced by Sean S. Cunningham, directed by Steve Miner and with a screenplay based on an initial story by the fantastic Fred Dekker, House is a lot of fun for horror fans. It even has a decent soundtrack from Harry Manfredini.

You'll be completely unsurprised to learn that House is all about a haunted house. After the death of his grandmother, a writer returns to the family home he knew (and the scene of his son's disappearance) and begins to suspect that something is wrong with the house. More worryingly, he starts to think that his son is trapped somewhere within the house. Or, at least, his spirit. Is the house determined to claim victims or is the traumatised author, who is also working on a new book based on his experiences in Vietnam, slowly but surely losing his marbles?

What it lacks in genuine atmosphere and tension, House more than makes up for in impressive rubber monsters, inventive craziness and a nice blending of the humour with the horror. William Katt does well in the lead role, though he never did fulfil the potential shown in his superb Carrie performance. Handling more of the comedic moments is George Wendt, good fun as a concerned neighbour. We also have the lovely Kay Lenz as Sandy, Katt's ex and the mother of the missing boy, and the intimidating Richard Moll as Ben, a dark and dangerous memory from Vietnam.

Steve Miner has never been a truly great director but I have always found his work enjoyable enough, for the most part, and he's capable of putting together fun, lightweight movies. The screenplay, by Ethan Wiley, works just fine. The dialogue could be sharper but the overall tone of the movie and the set-pieces will raise a smile on the face of anyone who can immediately think of dozens of influences on the material.

It didn't really, as hoped, launch another hugely successful franchise for Cunningham and co. but it did lead to three sequels of decreasing quality and remains a fine slice of 80s horror hokum. 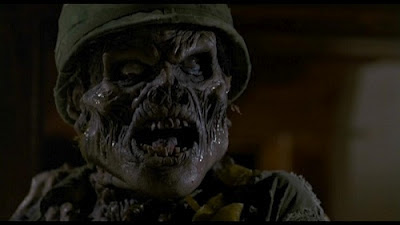