I really tossed and turned while considering just how to rate this one. No, no, no, if you came here to read about Abraham Lincoln: Vampire Hunter then you have been fooled once again by those cunning marketing folks over at The Asylum. THAT Abraham Lincoln movie is due out very soon but, as usual, The Asylum make up for their lack of originality by getting their movies out there faster and cheaper. I also have the sneaking suspicion that either their movies are getting more enjoyable or that my brain has just given up and started to enjoy micro-holidays while I watch them.

What do I need to tell you about the film that isn't already spelled out for you there in the title? Not a lot, really. Abraham Lincoln (Bill Oberst Jr) is the presidential figure that you know about from history but what you won't have been aware of is just how he had to do his best to save America from a nasty zombie epidemic. Thankfully, he was pretty happy with sharp, hand-held, weaponry.

Directed by Richard Schenkman (who also wrote the screenplay based on a story idea by Karl T. Hirsch and J. Lauren Proctor based on *ahem* something that clearly inspired them), Abraham Lincoln Vs. Zombies features many of the usual flaws that movies from The Asylum have. The score is quite bland for most of the runtime - there are a couple of nice moments here and there but a lot of the music just reminds you of something that you'd hear in the background of an advert for some new eco-friendly, gluten-free, hemp-based cheese . . . . . . or something. The acting from most of the supporting players is pretty bad but the edge is taken off the pain by just how good Bill Oberst Jr. is in the lead role. There are also a few good turns elsewhere - Baby Norman is very good as Mary Owens, Canon Kuipers is an enjoyably courageous young Teddy Roosevelt and Christopher Marrone has fun as Pat Garrett. Historical accuracy may not be to the fore but at least the movie doesn't disappoint with the fun factor.

Some moments are very good, very good indeed (including an excellent little punchline to end everything), but you also have the inevitable moments that will make you want to scream at the screen. People who seem to wander backwards slowly, either facing death by zombie with a distinct lack of urgency or allowing death by zombie to sneak up right behind them. There's also some drawn out obstinancy and ignorance that beggars belief, considering what the characters can see happening around them.

All in all, this is as much fun as you should expect it to be, thanks in no small part to a fantastic central performance and an entertaining central premise copied stolen cribbed derived from other works. 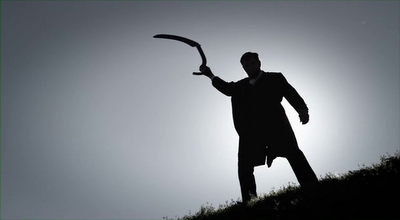