While it's really nothing more than a slice of exploitation dressed up as a history lesson, there's something undeniably impressive about this bold and horrifying look at the rule of Idi Amin (played by Joseph Olita). In fact, as much as you may find this laughable, the brutality on display here and the self-delusion of Amin sits easily alongside the depiction of events in The Last King Of Scotland. Of course, that movie had big names involved and a bit more good taste but maybe when it comes to looking at figures such as Idi Amin there's a case to be made for not softening the edges and for using some shock tactics to help hammer the message home.

The script by Wade Huie and direction by Sharad Patel both do a pretty good job of sketching out the state of a nation ruled over by a tyrant and a madman. Joseph Olita may not be the best actor for the role but his delivery and erratic style somehow fits brilliantly with the ever-changing whims and extravagant lies that his character lets loose with almost every breath he takes. His performance is definitely the focus of the whole movie, of course, but the other actors all do well as they support or oppose the madness.

There's a lot here that will turn your stomach - bullying, rape, mass murder, false imprisonment, torture, a horrific abuse of power and much, much more - and the pill isn't sugar-coated so a strong reaction is to be expected but, like many fine horror movies (and, whether you agree or not, I easily class this as a horror movie), the film takes a long, hard look at a part of our world history and the darker side of human nature. We may not like what we see but we shouldn't forget it all either.

Rise And Fall Of Idi Amin may not be a factually accurate record of events but it's a surprisingly decent, and eye-opening, starting point and does more than enough to encourage people to investigate further into this whole horrific chapter, looking at just how Amin got to his position and what major scars he left on the psyche of Uganda. Which makes the movie a success, tasteful or not.

Pricey, pricey, I hope this gets a better release at some point.
http://www.amazon.com/Amin-The-Rise-And-Fall/dp/B0001JX9J4 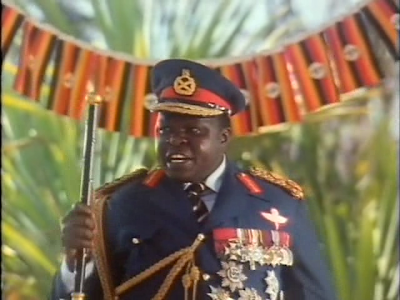