While this is an enjoyable enough effort from Abbott & Costello it also feels like a bit of a step backwards. There is definitely some decent comedy here and there throughout the movie but you also get plenty of recycled gags (which should come as no surprise to anyone who has more than a passing knowledge of the A & C  filmography) and a few songs as well. Okay, the songs are quite entertaining but they still take up time that could have been given over to numerous comedy routines.

The plot is a riff on the old Hatfield-McCoy feud that happened in the latter part of the nineteenth century. It comes to light that Lou, playing Wilbur Smith, is a long lost relation of the McCoy family and his return should be enough to prompt the matriarch of the family to reveal the whereabouts of some family treasure. Bud, as Al Stewart, will go along for a share of the loot and singer Dorothy McCoy (played by Dorothy Shay) may soon regret ever informing Lou of his feisty family tree.

All of the usual suspects are in attendance behind the camera. Charles Lamont directs once more and the script includes contributions from Robert Lees, Frederic I. Rinaldo and John Grant. But it's the cast that lifts the whole film from something potentially dull and below average to a solid slice of comedy. Bud and Lou are their usual selves and Dorothy Shay is a sassy lass but the supporting players are even more enjoyable - Ida Moore is great as Granny McCoy, Shaye Cogan is still very cute despite being a bit of a tomboy character, Glenn Strange makes his second appearance beside our comedy leads (albeit this time without the heavy make up required to play Frankenstein's monster) and Margaret Hamilton has a bit of fun with her reputation as the most well-known witch in cinema history.

When I started writing this review I was going to give the movie a 6/10 rating at most but the more I think about it, the more I realise that this is a very enjoyable piece of entertainment. I still have misgivings about the songs and the amount of recycled gags but I can't deny that I was smiling and laughing from start to finish. Which is why it ends up getting a 7. 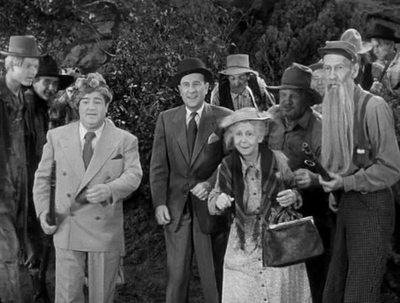