Going To Pieces: The Rise And Fall Of The Slasher Film (2006)

Far from the definitive overview that the praise claims on the DVD cover, this documentary is still a pretty entertaining primer for a subgenre often frowned upon by movie lovers. If horror is a genre barely tolerated by some who seek to dismiss it whenever possible then the slasher film is the subgenre often most easily held up as an example of all that is wrong with "those types of movies". Of course, the movies that fall under this classification are as varied in quality as movies from any other subgenre and this documentary at least shows off the variety available to audiences.

Based on the book of the same name (which I've heard great things about but, sadly, never read), this is one of many documentary features that seems to be very much "damned if they do, damned if they don't". The subgenres and the springboards for discussion are just too deep and full of potential to be quickly skimmed over. Of course, the usual suspects are here (the tentpole movies from John Carpenter, Wes Craven and Sean S. Cunningham) but there are also a few notable titles missing. Black Christmas was probably the main one that I found conspicuous in its absence. I think that it did appear briefly onscreen but I don't recall too much discussion about it and I felt a bit cheated to be hearing so much about Halloween without the Bob Clark movie being given due respect. Strangely enough, I've never been the biggest fan of Black Christmas while Halloween has long been one of my favourite horror movies of all time so I can only imagine how disappointed real fans of the film will be.

Then we have the fact that everything discussed is discussed in so much detail (in terms of plot points and twists) that you can't help wondering just who would get the most from it. Beginners will have far too many movies ruined for them while fans who have already seen a large portion of the movies mentioned will feel that not enough films are given due attention. Translation = "damned if they do, damned if they don't".

It's a nice collection of clips and reminiscences about the slasher movie subgenre but nothing essential for those who already know their Crystal Lakes from their Elm Streets. 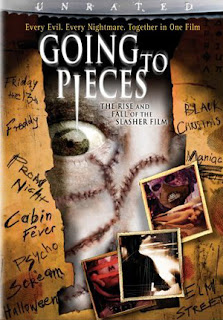