Back in the late '80s and early '90s, Jean-Claude Van Damme was one of the top action movie stars. He'd done his time (there was the early role in a porn movie and then the film in which most of us saw him as the villain - No Retreat, No Surrender) and then low budget action flicks like Kickboxer and, a movie that remains one of his very best, Bloodsport set him on a fast track to superstardom that may not have remained at full strength but has certainly kept him in a career of high kicks and any excuse to do the splits. Watched nowadays, the better movies featuring JCVD in a leading role remain slick and enjoyable slices of entertainment. With plenty of high kicks and excuses for him to do the splits. But it's his adventures mixing sci-fi in with the action that seem to have stood the test of time the best. Universal Soldier is absolutely superb (thanks, in no small part, to an absolutely brilliant performance from Dolph Lundgren) but Timecop remains a very fun watch, despite its many flaws.

The story is based on the Dark Horse comic series and Van Damme plays Walker, a man who we see at the start of the movie having his life pretty much torn apart. We then skip forward a number of years to see that Walker is, funnily enough, a "timecop". Time travel has been invented but it needs to be closely monitored at all times and nothing should be done to change the past. Those who engage in such deeds (making themselves rich or trying to kill figures from the past, etc) are tracked down and severely punished. Bruce McGill plays the abrupt captain of the division who is also a friend to Walker, Gloria Reubens plays an agent ordered to tag along with our hero after his partner gets a bit too greedy and Ron Silver gives another entertaining performance as McComb, a Senator who has the Presidency in his sights and might just break the laws to get it. There's also Mia Sara looking a bit doe-eyed and being an extra motivational factor for our hero. And did I mention that Van Damme does some high kicks and even the splits?

Peter Hyams directs things with his usual skill. He's no major artist, in my opinion, but I've always found him to be a very dependable craftsman who often makes solid entertainment. The performances are better than average for a JCVD movie, with special mentions going to the great McGill and the fun Silver, but it's the script that really helps this one stay surprisingly sharp and fresh. Information is interspersed throughout the action in a way that never feels too forced or obtrusive, the premise may be full of paradox potential but also does a great job of blending in the smart stuff without making anything too difficult to follow.

The action scenes are well done and will please action fans while the sci-fi stuff is handled competently enough to please those after a bit of time travel fun. There's no doubt that it will have the more eagle-eyed viewers tutting in disapproval as the end credits roll and the plot holes stand out but the film never claims to be a serious look at the nature of time travel. It's an action-packed sci-fi thriller in which JCVD does some high kicks and has a few excuses to do the splits. Though I might have mentioned that already. 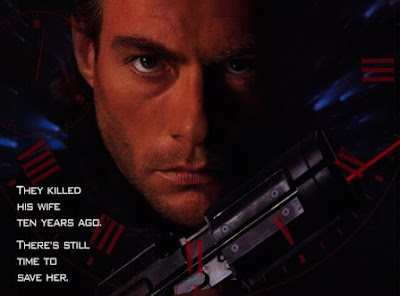