Directed by Spike Lee, and written by David Benioff (developing the screenplay from his own novel), 25th Hour is a superb piece of work that gives some great material to some great actors and then sits back to let everyone enjoy the results.

The story revolves around Monty (Ed Norton), a drug dealer who has been busted and is enjoying his last night with friends before heading to prison to do his time. He tries to relax in the company of his girlfriend Naturelle (Rosario Dawson) and then goes out for a meal with his father (Brian Cox) before meeting up with Jacob (Philip Seymour Hoffman) and Frank (Barry Pepper), his two best friends. The whole evening is tainted, however, by an element of mistrust and a desire to find out just who ratted on Monty.

This is, quite simply, a quality movie that you should sit back and let wash over you. Great acting, a great script (there are two standout moments that are so brilliant you may well want to rewatch them as soon as they're finished), plenty of food for thought that is never forcefed to the audience and some nice visual flourishes here and there all add up to something almost perfect. In fact, the only thing really holding it back from being a perfect movie is the fact that a number of scenes really feel a bit pointless (including the two that I think are the best in the movie). They're NOT pointless, and I think that everything in this movie comes together to make a whole experience much more than the sum of its parts, but it's easy to view them that way.

Norton is great in the lead role, believably smart and cool, but the supporting cast sees a number of people knocking it out of the park. Philip Seymour Hoffman gives the effortlessly great performance that he's given in almost every movie that he's been a part of, as does Brian Cox, while Barry Pepper is so good that I can't help but wonder, every time I see him doing such great work, why he hasn't had bigger roles in the past decade or so. Rosario Dawson is as lovely as ever and Anna Paquin (playing a free-spirited student that Jacob fancies, while he knows that he shouldn't) is a fizzing bundle of youthful energy and passion.

I've not seen enough Spike Lee movies, sadly, to judge this film in comparison to his highly-regarded earlier works (yes, yes, I will aim to rectify that situation ASAP), but 25th Hour is almost as good as Inside Man and shows a director who has matured over the years while never losing that interest in questioning the status quo and provoking a reaction. 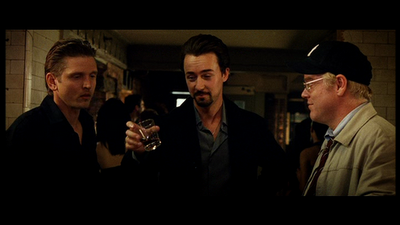