Bookended by some scenes that show Abbott & Costello getting themselves a babysitting job, this colourful movie puts our comedy duo into the old fairytale. The basic story is the same, though there's the added presence of a captured princess (Shaye Cogan) and prince (James Alexander). The giant (Buddy Baer) is still a fearsome presence, all fee-fi-fo-fum and willing to eat small people he has to hand, but there's also a rather tall woman (Dorothy Ford) willing to help Bud and Lou escape his clutches.

If you seek out this movie because you're a big fan of A & C then you're likely to be disappointed but if you fancy seeing a version of Jack & The Beanstalk that happens to feature A & C then you may enjoy yourself. It sounds obvious but it's important to emphasise the point - this is the fairytale with our leads shoehorned in as opposed to a vehicle for our leads with the fairytale storyline added as an afterthought.

There are less laughs than usual, a few bland songs and a sad lack of any magic in the material, written by Nathaniel Curtis and directed by Jean Yarbrough. The supporting cast don't add any sparkle either, although Shaye Cogan is a pleasant onscreen presence and Dorothy Ford does well with what she's given.

More of a curio than anything else, I can't really think of anyone I'd particularly recommend this film to. There are better versions of the fairytale out there (okay, maybe the best one that springs to my mind has Mickey Mouse and company in it but it's still fine entertainment) and almost every other Abbott & Costello movie has better comedy material for the boys to work with.

One of their weakest outings, this just goes to show how good A & C were onscreen when allowed to play versions of themselves (or, rather, the entertainment personas that they'd perfected over the years) and how quickly the charm disappeared when they were slotted into material that just didn't fit right around them. The film still has enough to make it a pleasant time-waster but it's not something that you would go out of your way to watch or rewatch.

The film is available to view, free and legally, here - http://archive.org/details/jack_and_the_beanstalk_ipod 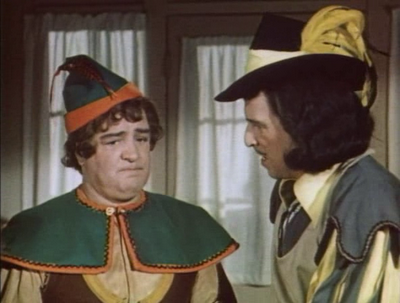