Despite my love of both Sherlock Holmes and my love of Disney movies, I am neither an expert nor anywhere near a completist in both fields. But I am still surprised that it took me this long to finally watch Basil The Great Mouse Detective, a film that is, for all intents and purposes, a Sherlock Holmes tale that has the main parts played by a variety of animals. I am also surprised that, according to a few articles I browsed before writing this review, this film was quite a success, so much so that it renewed confidence at Disney in their animation department and helped to start them on their road back to grand success (The Little Mermaid, a few years after this, would see them end the decade in a much stronger position than their starting point, and the '90s had some huge animated hits, such as Beauty & The Beast, Aladdin, The Lion King, etc). And I missed that. Even as a prime potential viewer, I suspect I was already trying to sneakily watch more adult fare and dismissed this film as something too childish for me. I don't even recall a big marketing push for it, although I assume that it would have been given the usual litany of ads, featurettes on TV shows, and tie-ins.

Basically, this is a film I kept putting lower down on my list of prioritised viewings because I wrongly assumed it had been a failure. It wasn't then, and it isn't now.

Little Olivia Flaversham (Susanne Pollatschek) seeks the services of the greatest mouse detective in London (Basil, voiced by Barrie Ingham) when her toymaker father is snatched away by a large bat. Bumping into Dr. David Q. Dawson (Val Bettin, portraying the Watson to the mouse version of Holmes), Olivia is guided to Basil and makes her case for help. The detective is initially unmoved by her tale, until he realises that it must be part of a scheme cooked up by the nefarious Professor Ratigan (Vincent Price). What dastardly plan is he hatching that requires a toymaker, stolen clockwork mechanisms, and many toy soldier uniforms? The game is afoot.

Despite not being quite up there with their very best work, and that is a high standard to reach, Basil The Great Mouse Detective is definitely high up in the overall Disney canon. The animation is quite lovely, with some delightful little details in most of the scenes, the script (worked on by many people who were transferring the characters from the pages of "Basil Of Baker Street", written by Eve Titus and illustrated by Paul Galdone) is a lot of fun for all ages, and the voice cast is excellent all round, with Ingham and Bettin a wonderful central duo, Pollatschek a sweet little girl in peril, and Price as ear-pleasing as ever with that immediately recognisable voice, used to great effect in yet another villainous turn.

Like other great Disney movies, this also has some moments that will scare younger viewers before carrying them back into safer territory. It's a perfect mix of thrills, chuckles, and spectacle (including a fantastic finale that takes place around Big Ben).

If you're a fan of fine animated films, a fan of Sherlock, or a fan of both, then you should make time in your schedule for this one. There's even a wonderful audio snippet of Basil Rathbone used. 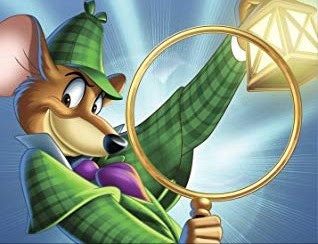