Directed by Josephine Decker, who also co-wrote the script with Donna di Novelli (although I suspect she wouldn't take full credit and would instead point to it being a collaborative, organic, experience), Madeline's Madeline is the kind of film that I usually tend to dislike. The main characters are generally insufferable, the style of the film attempts to be so overly natural and earthy that it feels fake, and it's got moments of people doing the kind of drama school schtick that you suspect many actors cringe about when they think back to whatever they had to do to pass whatever course they signed up for.

Helena Howard is Madeline, a young girl with a number of problems. It's never made clear exactly why she is on medication, but major mood swings and abusive tantrums seem to indicate a serious mental health issue (perhaps bipolar disorder, perhaps a form of autism) that affects her life, and the lives of those around her who care for her. The main carer for her is her mother, Regina (Miranda July), and the worst scenes in the film show her bearing the brunt of her daughter's rage. The one thing Madeline loves is performance art, and she seems to be very good at it. So good that a theatre director, Evangeline (Molly Parker), decides to use her more and more, allowing Madeline to just let everything out while they develop the project around her "character".

This is another film that has an interesting idea at the core of it, yet doesn't do the best it can with it. Unfortunately, in this instance, I'm not sure if Decker realises where the more fertile ground lies, which leaves viewers watching scenes in which the lead character is horrible before she is then finding her happy place while performing. The word cathartic may have art in the middle of it, and many of us are aware of the power of it, but it's perhaps not always the wisest move to indulge someone who may need a bit more care/aftercare to stay grounded and even in between the highs that performing can deliver.

The camera moves around people, and right up beside them. The soundtrack is made up of ambient noise turned all the way up, this is another one of those films in which we have to hear the breath of every main character. It's a choice made to throw viewers in amongst the cast, and perhaps show just how much Madeline takes in from the environment around her, but it works out to be nothing more than another annoyance in a film full of them. It softens some hard edges that should have been there throughout, as far as I'm concerned, and tries to keep viewers onside with a main character who just isn't very nice. You can have main characters who aren't very nice, be it their fault or not, and still make a film around them (especially here, because Evangeline is really the more horrible character, due to the fact that she should know better than to essentially abuse the situation). Decker doesn't do that here. She wants to, and perhaps thinks she has, but the script, and the stylistic choices, make this a failure in that regard.

Howard does well enough in the lead role, and there are decent supporting players, but the scenes that work best are those that involve July and Parker, both of the main adults viewing someone they care about from two very different angles. A better film would have brought out even better performances from them, I suspect, but they still remain highlights here.

It's horrible, it drags (I've seen 180-minute epics that felt briefer than this), and it doesn't manage to make any interesting comments on the central relationships. A huge missed opportunity. But, hey, at least you get enough moments of actors pretending that they're animals. Can you even call yourself a thespian if you haven't convinced people you were a cat for five minutes.

There's a Region A disc here. 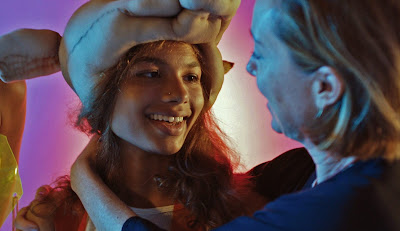