Built around a very fun central idea, Smallfoot is an unassuming and entertaining animated feature that makes good use of a decent voice cast (even James Corden suits his role) and a mix of comedic mishaps, nice songs, and the life lessons you usually get from this kind of fare.

Channing Tatum plays Migo, a yeti living happily in with lots of other yetis in their mountaintop community. Everything is done a certain way, according to rules written on various stones, including someone being launched head-first at a gong to start the sun rising (the current holder of this position is Dorgle, Migo's father, and Migo is keen to take over the role). But things change when Migo ends up falling down the mountain and spotting a strange, legendary, creature. A smallfoot (Percy, voiced by James Corden). In a reversal of the way these things are normally done, Migo tries to convince the others of what he saw, and then sets out to get proof.

Do children still hear much about yetis nowadays? I know I was obsessed with these things as a child but it feels as if cryptozoology isn't the fertile ground it used to be. People are so used to not trusting anything put in front of them nowadays because they're all very much aware of camera glitches and photoshop trickery. Years ago we may have had Harry & The Hendersons but nowadays it seems that unknown animals are mostly used in a wide and varied selection of horror movies. Yetis aren't cool, if you'll pardon the expression, and Smallfoot is more endearing because of that.

The more I think about Smallfoot, the more I like it. It would be easy to sneer at it, to dismiss it as a film exactly the same as many others you may have already seen, and enjoyed. But what separates it from many of the other animated releases from recent years is a refreshing feeling that it is wanting to tell a story with humour and heart without necessarily also attempting to be cool and trendy. Yes, there are a couple of scenes making use of modern technology (and Percy is a human who is hoping to fake a yeti sighting in order to boost the ratings for his TV show) but the core message of the film seems to reject the potential misrepresentations and misunderstandings that electronic communication can throw up in favour of just connecting with one another and trying to show that our common traits are much larger in number than our differences.

Based on a work by Sergio Pablos, this is the second animated feature from Karey Kirkpatrick (Over The Hedge is fun, and let's not mention the one live-action film in between, which is an Eddie Murphy vehicle far from his best), who is joined by Jason Reisig (making his debut in a co-director capacity). Kirkpatrick also co-wrote the screenplay with Clare Sera so I will praise both of them for the tone of the film. The visuals are nice and imaginative, especially when showing the daily lives of the yetis, and the pacing is perfect, with the few songs throughout playing long enough to be catchy without going on and on to the point of overstaying their welcome.

Tatum is very good in the lead role, Corden equally so, and there's a solid selection of supporting cast members. Zendaya and Common are two of the main ones, with the latter being a character responsible for maintaining practices that are designed to keep the yetis safe from harm, but you also get Danny DeVito, LeBron James, Gina Rodriguez, and Yara Shahidi.

As far removed from childhood as I am, I'm going to have to buy this soon. And I'll look forward to rewatching it. I may even sing along with the songs. Even if I do sound . . . abominable. 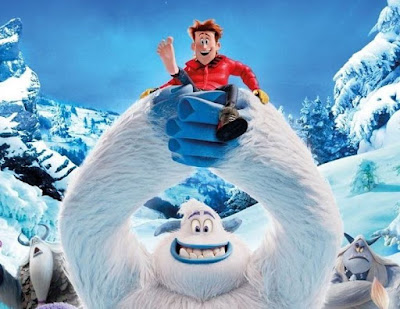