An animated film that mixes elements of the classic "Jack The Giant Killer" tale and numerous aquatic puns and gags, Shark Tale doesn't reach greatness in any individual aspect, but the silly jokes and excellent voice cast make it a fun way to pass some time.

Will Smith is the voice of Oscar, a small fish that dreams of big things. He works in a whale washing business, employed by a puffer fish named Sykes (Martin Scorsese). So preoccupied is Oscar with his dreams, he is oblivious to the fact that another employee, Angie (Renée Zellweger), seems quite smitten with him. Meanwhile, a mob boss shark (voiced by Robert De Niro) is struggling to get his youngest son, Lenny (Jack Black), to think and act like a proper shark. All of these characters are about to collide as Oscar turns his fortunes around after a major incident involving his close proximity to a dangerous shark that ends up dead.

It's hard not to see a couple films from this time as cynical attempts to grab some of that Finding Nemo money. You had this film and you had The Reef AKA Shark Bait (2006), and neither of them managed to be as good as the Pixar film that seemed to birth them. Thankfully, however, this is closer to the first movie than it is to the later one, which is just cheap (at least it certainly looks cheap), lazy and visually ugly.

That's not to say that directors Vicky Jenson, Bibo Bergeron, and Rob Letterman do much to garner praise here. The visuals are fine throughout, although sometimes it can be easy to forget that things are set under the sea (despite all of the main characters being fish), and the script, co-written by Letterman and Michael J. Wilson, is simple and amusing, keeping everything bright and lively for the intended younger viewers.

But the cast is where the movie shines. Smith is in fine form, all smiles and cockiness even as he looks to move further and further out of his depth, no pun intended. Zellweger is a sweet friend/potential romance, even if her character doesn't get to do much beyond helping Oscar and making heart-eyes at him. Scorsese and De Niro are both wonderful, their voices fitting their very different characters nicely, and their every interaction a treat for film fans. Black is a bit weak in his role, as is Angelina Jolie, also suffering from the fact that her character is shallow and only interested in someone with plenty of money, but the other people lending their voices to the proceedings include Michael Imperioli, Peter Falk, Ziggy Marley, Doug E. Doug, Vincent Pastore, and one or two others you should enjoy.

You'll probably never prioritise this in your viewing schedule unless you have little ones to entertain but you could do a lot worse. It has a decent soundtrack, plenty of colour, and one silly little gag involving a hammerhead shark and a piece of cutlery that makes me laugh heartily every time I see it. 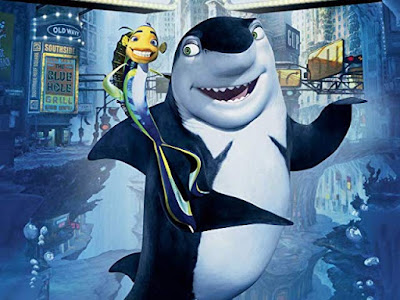